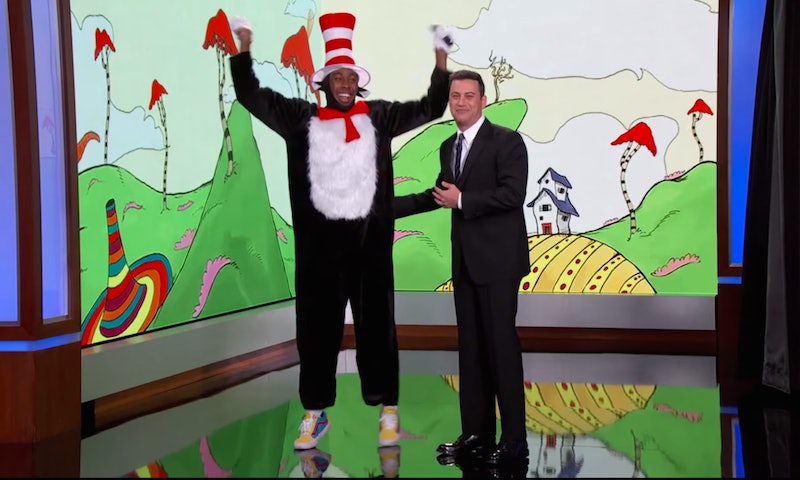 If you've noticed everyone slipping in a few more rhyming couplets than usual recently, it's because an undiscovered Dr. Seuss book has been released, and nobody, not even Tyler, The Creator, can contain their excitement. Appearing on Jimmy Kimmel Live!, the 24-year-old rapper and record producer tried to sink his teeth into some of Dr. Seuss’s new tongue-twisting rhymes. In a sentence I never imagined I would write, Tyler, The Creator rapped the new Dr, Seuss book — all while dressed as the Cat in the Hat.

As part of the sketch, Tyler, The Creator struggled to get into the “flow,” with Jimmy Kimmel having to interrupt him several times to ask him to make it more “cool.” Do it “like a rap song,” Kimmel suggested halfway through Tyler’s awkward delivery. I’d tell him not to give up the day job, but…

Seeing as Dr. Seuss died in 1991, the fact he has released a new book is more than a little exciting. What Pet Should I Get? sounds just as charming and whimsical as you’d expect from the eccentric poet, and people are apparently loving this as much as ever: Amazon’s copies have already completely sold out after just two days. What Pet Should I Get? is being published by Random House, who promise to reveal the story of the book’s posthumous discovery to everyone who buys a copy. They think it may have been written back in the '60s, so it’s about time we laid our hands on it.

Everyone’s finding it hard to contain their excitement about this new release — well, perhaps everyone except one. After rapping What Pet Should I Get? , Tyler, The Creator declared the whole thing was “wack.”

More like this
The 'Lady Chatterley's Lover' Book Leaves Us With A Troubling Question
By Catharina Cheung
Taylor Swift Is Writing & Directing Her First Movie
By Jake Viswanath
Yes, That's Lindsay Lohan's Sister Singing In The 'Falling For Christmas' Movie
By Radhika Menon
This James Bond Event At Abbey Road Studios Was A 007 Fan's Dream
By Samantha Rollins
Get Even More From Bustle — Sign Up For The Newsletter