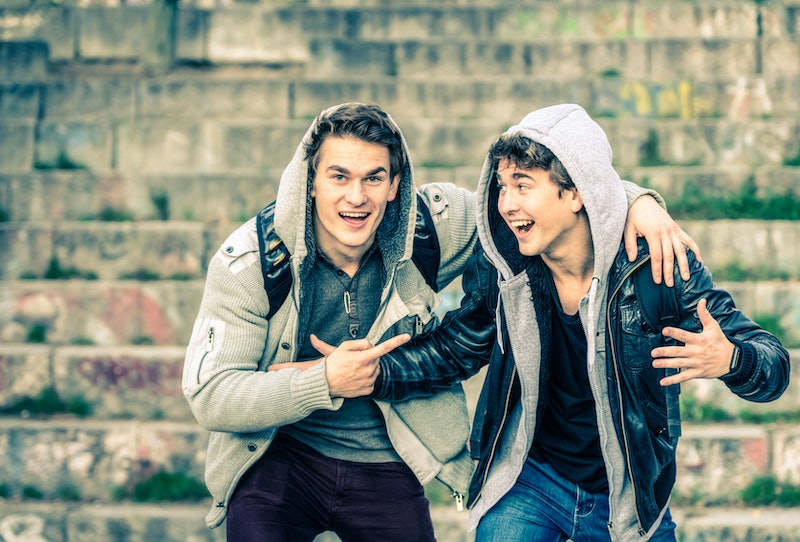 Yes, you read that right: straight white male sexual fluidity. Author Jane Ward explores the once-unheard-of idea in her new book Not Gay: Sex Between Straight White Men , where she explains that the common "bro-job" (aka when guys who identify as straight hook up with other guys who identify is straight) is not an indicator of future gay identity, but rather a way for straight white men to greet, grapple with, and ultimately reinforce their straightness, whiteness, and maleness.

Think about it: straight women can smooch other women (or even go for more than smooches) without being categorically labeled as lesbians for doing it. In fact, the fetishization of femme-on-femme action by straight men actually encourages straight women to play with other (important: feminine, straight, and therefore non-threatening to men) women without threatening their straightness.

What if the truth is that straight men experience, or could experience, just as much sexual fluidity as straight women, but the act of dude-on-dude sexytime is so stigmatized that they fail to self-report these feelings or desires when they bubble up?

Since being a straight white male is such a comfortable default in society, it can be more difficult for them to examine, question, challenge, or critique their identities, unless they feel an overpowering and all-encompassing pull toward identifying as another gender or sexual orientation.

But, as Ward's book demonstrates, straight white men engage in "gay" sexual behaviors all the time. From NYU Press's release:

Or, you know, the casual post-game locker room bro-job, which is totally not gay at all.

But here's the thing — it really isn't gay. What's gay is being gay. And ultimately, dudes who defensively bark "no homo" to quash any possibility that their actions might be perceived as gay only perpetuate the notion that anyone who is that cagey about it must "secretly" be gay. The truth is, being cagey about it probably just means you've never really, earnestly examined your sexual identity, because the possibility of giving up your straight privilege is too uncomfortable to fathom.

But again, being gay is what makes you gay. So that weird defensiveness is kind of ruining fluidity for the guys who identify as straight, fool around with a guy, and then authentically continue to identify as straight, which is totally legitimate, unlike hastily declaring "no homo" after accidentally touching thighs when sitting next to each other on a couch.

"In the end, Ward’s analysis offers a new way to think about heterosexuality," the press release continues, "not as the opposite or absence of homosexuality, but as its own unique mode of engaging in homosexual sex, a mode characterized by pretense, dis-identification and racial and heterosexual privilege."

More like this
25 Inspiring Quotes From Black Women To Celebrate Black History Month
By Kyli Rodriguez-Cayro and JR Thorpe
12 Aphrodisiac Desserts To Spice Up Your Valentine’s Day
By Kaitlyn Wylde
24 History-Making Black Women You Probably Didn't Learn About In School
By Ayana Lage and JR Thorpe
These Artists Are Reimagining Black History Month To Create A Better Future
By Katie Mitchell
Get Even More From Bustle — Sign Up For The Newsletter
From hair trends to relationship advice, our daily newsletter has everything you need to sound like a person who’s on TikTok, even if you aren’t.