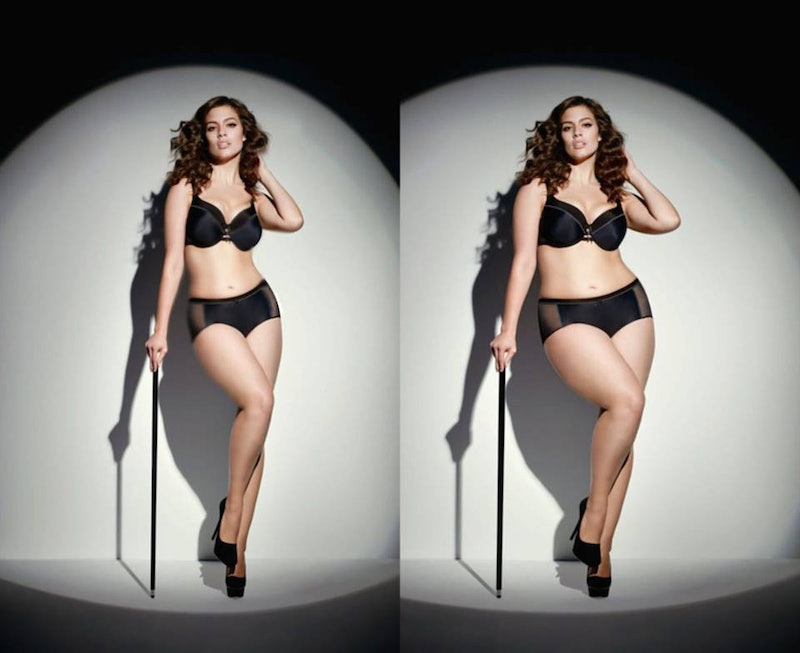 The photoshopping of celebrities, models, and even your friends' selfies has arguably become an inherent part of life in the Internet age. Photoshop can be used for purely comedic effects — memes, memes galore — of course, but the negative implications of altering people's bodies have been a hot topic for several years. In this week's news, Facebook page Project Harpoon has been using Photoshop to edit the bodies of plus size women (without their permission) to make them look thinner. According to its Facebook page, their efforts are a stand against "a recent trending surge of 'pro-obesity' and 'fat acceptance,' [which] have paved the way for many people to renounce exercise and personal healthcare in general. This page aims to only show that being skinny is okay as well! Skinnyshaming is not okay."

There have been plenty of projects that do the opposite of Project Harpoon, such as David Lopera's work, for which he once photoshopped celebrities to look fat. If you ask me, though, none of these have had the potential for damage that the folks behind Project Harpoon are currently propagating. In less than a week, the page has reached over 8,000 likes, which is well more than 1000 likes a day. Although new to Facebook, the project's origins go back to known troll sites such as 4chan and Reddit. The Reddit thread doesn't just promote "#ThinnerBeauty," but even teaches users how to join in on the "fun" and learn to photoshop plus size people, too.

The admins of the page are still refusing to acknowledge the negative impact these photoshopped images could have on plus size humans. When I contacted Project Harpoon seeking comment, an admin responded that they are "all for body positivity," and that they are hoping to "give our users realistic goals that can motivate them to better themselves." When asked whether they believe their work actually benefits people or if it's just meant to promote aspirational beauty, I was told they receive "countless messages each day with people praising the page, who have been inspired and love what we are doing."

When in conversation with Project Harpoon, I couldn't help but notice that the people behind the page honestly believe they're sending out a positive message into the world. One of their responses regarding fat shaming states: "We also are fully aware of the complications that come with all body sizes and judging them, but sometimes someone has to step forward and make those subjective views known, for better or for worse. that someone is us."

It seems that the people behind the photoshopping may have a poor grasp of what body positivity means. Although they might not be seeking to cause harm or upset, that doesn't mean they get to remove themselves from the responsibility of their project. Even if they deny the accusations, ultimately what Project Harpoon is doing does actively fat shame people (predominantly women) in order to promote society's "thin is always better" beauty standard.

The "promoting a healthy lifestyle" argument is one that Project Harpoon sticks to rigidly as well. Those who support this kind of concern trolling mentality often subscribe to the belief that being thin automatically makes you healthy, while being fat automatically makes you unhealthy, both of which are untrue. Regardless of intent, though, the act of photoshopping unwilling participants to look thin — often accompanied with disparaging "before and after"-esque comments like, "From Miss Piggy to Miss Pinup" — can be harmful not just to those involved, but to those who have to see it.

Representation of fat bodies in the media is still revolutionary. Speaking from experience, though, I know that it's so much easier to love yourself when you see those similar to yourself represented as beautiful by the mainstream. In actively altering images of plus size people to not be plus size anymore, Project Harpoon is aiming to "inspire," but all that it will realistically inspire is self hatred. The images purposefully fuel fat versus thin arguments through falsified thin bodies and actual fat bodies. That Project Harpoon believes it cannot actively campaign against thin shaming without promoting fat shaming proves that the page isn't about body positivity at all. It's about making fat people feel like crap for not being thin.

Don't get me wrong: Skinny shaming is an issue, but not one that overrides thin privilege. Whenever I hear someone skinny shaming (be it with one-liners like, "Go eat a sandwich," or the suggestion that "bones are for the dog"), the comments often seem fueled in resentment. While resenting thin people for their place in society's hierarchy of aspirational beauty is not OK, I do understand where the frustration-fueled urge comes from. Campaigning against thin shaming has the opportunity to be an inspection of beauty standards and a step forward for body positivity. Project Harpoon, however, has achieved the opposite by implying that the subjects of these photos' beauty is invalid until they are skinny.

On Aug. 19, Hayat Rachi, founder and CEO of body positive lingerie brand Neon Moon, succeeded in getting an image of one of her models removed from Project Harpoon's page. In a message from Facebook, Rachi was told that the photo would be taken down — not because of hate speech or body shaming, though, but on the grounds of infringement of intellectual property. Since Project Harpoon started making waves, Rachi persistently began calling on users across all social media platforms to report the page and try to get it taken down. In a Facebook conversation, Rachi tells me, "I was utterly disappointed to find a photo of our model photoshopped unrealistically thin without any permission granted. A person's health cannot be determined from how a person looks. Their sole purpose is to harass women, and nothing more. They are disgusting."

As of Thursday, Project Harpoon will stop using its popular Facebook page and relocate to Operation Harpoon — a move meant to help escape the trolls and continue with its "work" in peace. When I asked the admin whether "trolling" referred to negative comments made about the "before" photos, the sexist and often highly sexual comments from mostly male members, or the commenters accusing the page itself of fat shaming, I was told "both" (assumedly meaning all three of the options I provided).

For a project trying to openly shame fat women and other plus sizers, Project Harpoon has proven that it cannot handle the critique that comes with putting yourself in the public eye by moving to a fresh new page away from the "haters." I can only hope that both pages get removed soon, or I'll start spamming them with my nudes in all my fat fabulousness.

More like this
What’s The Kibbe Body Type Test That’s All Over TikTok?
By Marilyn La Jeunesse
The Most Gorgeous Plus-Size Looks From The Met Gala
By Dominique Norman
What Is “Jello Skin”? The Latest Viral Trend To Know About
By Tomi Otekunrin
The Best Memes & Tweets From The 2022 Met Gala
By Olivia Rose Ferreiro
Get Even More From Bustle — Sign Up For The Newsletter