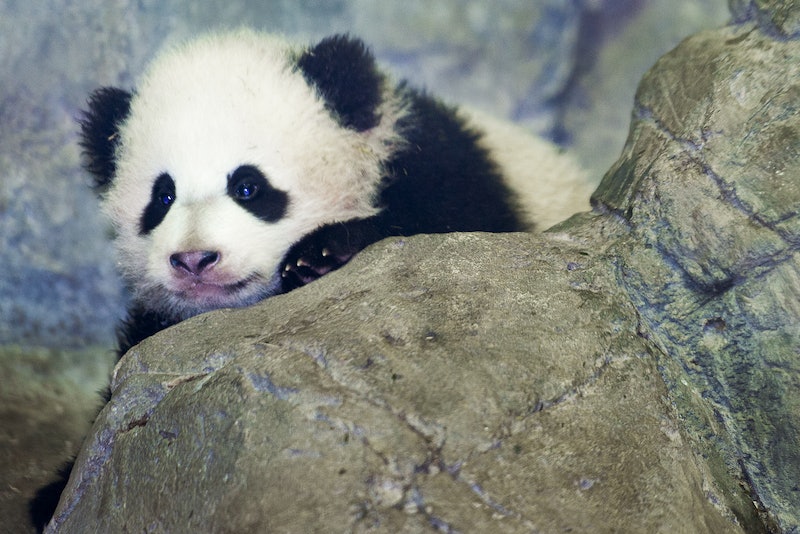 On Saturday,The Smithsonian National Zoo's giant panda, Mei Xiang, gave birth to two twins. It has been about two years since Mei Xiang gave birth to her daughter, Bao Bao, and zoo officials are nervous about the first week after the cubs' birth, as one of Mei Xiang's past cubs died just six days after its birth. Although many people are sharing photos of the cute, strange-looking baby pandas, there are few real reasons to be excited. The National Zoo's baby pandas aren't something I will celebrate because of the zoo's tumultuous past with animal care and the array of problems with captive breeding programs.

So far, Mei Xiang has picked up and licked her first cub on the zoo's live cameras, while the other cub was removed from the enclosure and placed in an incubator, which is part of the zoo's practice. Eventually, the zoo will remove the other cub and place it in an incubator and then replace Mei Xiang with her second cub, according to NBC Washington. The pandas appear to be in good health so far, but the zoo is nervous because a female cub died a week after birth in 2012. Mei Xiang has previously given birth to four cubs, but only two survived. This is among the many reasons why I'm not super excited about Mei Xiang's new cubs at the National Zoo.

Questions About The National Zoo

In 2013, a scathing internal report of the National Zoo prompted a Congressional review of the zoo's policies. In December 2013, a young, endangered Przewalski's horse, a Dama gazelle, and a kudu broke their necks and died after charging into fences, according to The Washington Post. The zoo reported a fourth death around the same time when a hog died of malnutrition and scars of an unknown origin. In the same month, a Grevy's zebra attacked a zookeeper who was not following protocol. Then, in the same year, both a red panda and a vulture escaped their enclosures, according to CNN.

The internal review of the zoo found that it lacked essential staff members to oversee medical care, "organization, accountability, follow-up, and communication," according to CNN. In 2014, the National Zoo hired seven additional animal caretakers and planned to hire another 10 staff members to solve the "staffing imbalances" that National Zoo Director Dennis Kelly told the Post "did put stress on the system" and led to some of the problems the zoo encountered. Kelly told the Post that the zoo struggled with balancing its restricted budget with animal care:

It is a tough balance, we're balancing that all the time. But our first priority is animal welfare and human safety. But at the same time we understand our mission is to provide a great guest experience, to do research and to do outreach.

Since January, five animals have died at the National Zoo, according to the zoo's press releases. Two older cheetahs and a wolf were euthanized due to medical conditions the zoo said arose from old age. The other two deaths aren't as straightforward. Macadamia, a male Agouti, escaped in July and then died early this month. According to the zoo's press release, Macadamia died from a potential head or neck injury:

Due to the habit of running quickly around the habitat, self-induced trauma is suspected.

Unfortunately, in some zoos, animals will exhibit stereotypic behavior — pacing, standing and swinging their heads from side to side (weaving), running in circles, and self-harm — which is often a sign of stress-induced neuroticism caused by captivity, according to Slate. Though the zoo has said Macadamia died from self-induced trauma, it hasn't responded to Bustle's questions concerning why Macadamia would hurt himself in his exhibit, or how the trauma occurred.

In the other most recent death at the zoo, Izabel, a golden lion tamarin, died after veterinarians amputated a fractured part of her tail and she removed her cast and picked out the sutures in her tail, according to the zoo's press release. Zoo staff found her unresponsive the next morning and believe she died in her sleep. The zoo hasn't responded to Bustle's questions concerning why Izabel wasn't under closer watch.

The National Zoo doesn't have the worst track record among zoos. The San Antonio Zoo, for example, has been named among In Defense of Animals worst zoos for elephants for six years because it isolates elephants, who are extremely social creatures. The National Zoo, though, has made that list three times for artificially inseminating its elephants — a process that animal welfare groups say is difficult for elephants to endure. It's hard to say where the National Zoo falls in numbers for the average number of animals that die at zoos simply because those numbers aren't publicly recorded. The National Zoo has made the news on a number of occasions for the frequency of animal deaths that occur there.

Because of the stresses animals often experience in captivity, breeding can be especially difficult. A 2005 investigation by Slate found that breeding animals in captivity is just harder for animals. Some animals born in captivity might miss social cues that they would otherwise develop in the wild; keepers might clean up waste, which holds important odors that signal fertility, too quickly in an enclosure where two animals are expected to mate; and stress can increase the chances of birth complications or deaths, according to Slate.

Furthermore, Bob Cisneros, the president of the American Association of Zoo Keepers and a keeper for over 20 years told Vice's Motherboard site that some zoo keepers don't use enough evidence-based operations when they're dealing with breeding programs. Often, breeding programs that are using hand-raised animals don't mimic the wild enough, which can lead to problems with the pregnancy and birth, Cisneros said:

Hand-raised animals do not make good parents. The bond that exists between a [mother] and its offspring is incredibly important because that offspring is taught some amazing behaviors that carry over into parenthood.

Proponents of captive breeding programs say that they give scientists a way to study animals who will soon be extinct in the wild. The National Zoo describes its captive breeding ideology on its website:

Those against captive breeding say that it distracts us from the real problem — how we can conserve wild animal populations in the wild.

The complications surrounding captive breeding programs often lead to a number of newborn deaths. For example, Mei Xiang gave birth to a stillborn cub in 2013, and in 2012, she gave birth to a cub that died after just six days because its lungs hadn't fully developed, according to the Associated Press. The zoo's director, Dennis Kelly, called the second cub's birth "especially devastating," according to the Washingtonian:

Even if we knew everything we know today, we probably would've followed the same protocols.

Because of all of these problems — with the National Zoo's care of animals generally and with captive breeding programs — it's not exciting that two new cubs were born into life at the zoo. Though Bao Bao will be moved to China at age 4 because the pandas are "on loan," it's unclear that these two new cubs will have the same fate. Regardless, the National Zoo does not have a captive breeding program that aims to release pandas into the wild, so these two babies will live their lives in captivity at a zoo with a questionable record. If they don't stay at the National Zoo, hopefully they end up at an organization with a better care record, even though no zoo can provide a truly "wild" experience.

More like this
Michigan’s Governor Is “Going To Fight Like Hell” To Protect Abortion Access
By Andrea Zelinski
Kate Middleton Is Hiring A New Assistant & The Job Description Is Very Specific
By Sam Ramsden
If You Have Pets, You Probably Don't Realize You're Making These Common Mistakes
By Mackenzie Edwards
25 Cheap Ways To Make Your Cat 5x Happier
By Claire Epting
Get Even More From Bustle — Sign Up For The Newsletter