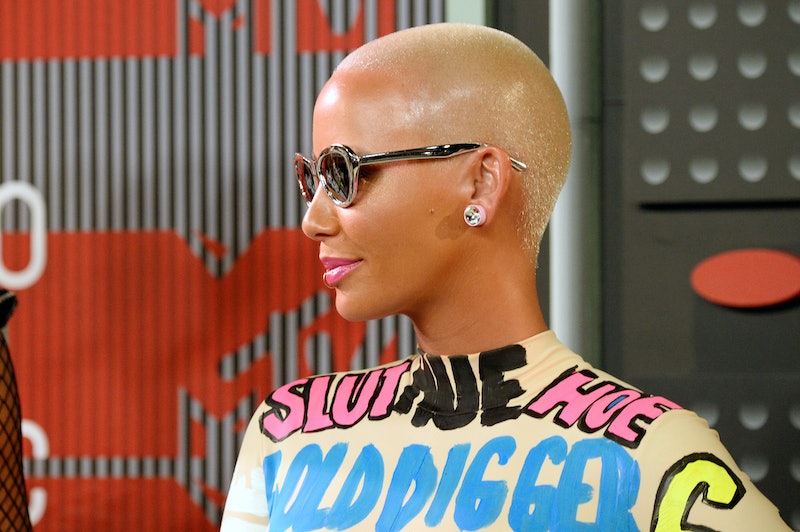 Amber Rose is not one to shy away from a jaw-dropping ensemble, and the 2015 Video Music Awards were no exception. In an effort to top her slinky chain-mail gown from last year's show, the Rose showed up on the red carpet rocking a very bold fashion — and feminist — statement. Rose, along with model Blac Chyna and two friends, arrived at to VMAs wearing outfits plastered with derogatory terms, such as "gold digger," "slut," and "bitch." With "Gold Digger" being featured so prominently on Rose's outfit, some might be wondering if Kanye West's "Gold Digger" was about his ex-girlfriend Amber Rose. After all, he was going to receive the biggest honor of the night, the Video Vanguard Award.

Well, Nancy Drews and Dudes, the timeline doesn't match up. According to Us Weekly, Rose and West dated from 2008 to 2010 — three years after West released "Gold Digger." Unless the rapper has a psychic ability we don't know about (and given his ego, why wouldn't he announce that to the world?), there's no logical reason the song would be about Rose.

So, why then would Rose paint this, along with many other demeaning words across her body? Perhaps she's issuing a big eff-you to another former flame. Earlier this year, Rose's ex-husband Wiz Khalifa was featured on Juicy J's single "For Everybody," in which he raps about a "stripper" and "ho*" who is, "all about that money." Some of those words look awfully familiar, don't you think?

Of course, we'll only know for sure if Rose speaks out about her exact reasoning, and it seems like she's letting her dress do all the talking.

More like this
Dua Lipa’s Best Looks From Her ‘Future Nostalgia’ Tour
By Dominique Norman
Olivia Rodrigo’s Song Dedication To 5 SCOTUS Justices Sent A Strong Message
By Grace Wehniainen
Will Beyoncé Be At The BET Awards To Perform “Break My Soul” Or Attend The Show?
By Jake Viswanath
Lily Allen Was “Quite Emosh” After Performing Sober At Glastonbury Festival
By Stephanie Topacio Long
Get Even More From Bustle — Sign Up For The Newsletter