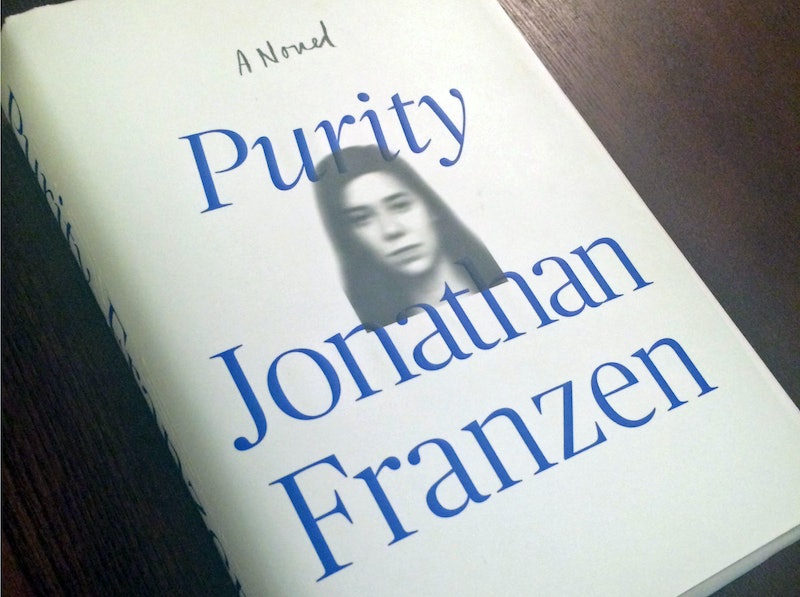 Back in March, publisher Farrar, Straus and Giroux (FSG) offered readers a sneak peek at the cover of Jonathan Franzen's upcoming title, setting off a whirlwind of speculation as fans clamored for details about the woman on the Purity cover. The book hit store shelves on Tuesday, but Franzenites are still in the dark regarding the cover model's identity. Here are a few details on the mystery.

Purity's design comes from FSG creative director Rodrigo Corral, the artist behind many fantastic novel covers, from Junot Díaz's The Brief Wondrous Life of Oscar Wao to Jeffrey Eugenides' The Marriage Plot. The newest Franzen title looks totally unlike Corral's other work, however. It uses a lightly embossed, blue serif font, and features a slightly out-of-focus, black-and-white portrait of a young woman. Purity looks remarkably low budget, but — given that the novel concerns a $130,000 debt — perhaps that's exactly what Corral is going for.

In an interview with The Washington Post, Corral says the Purity model — whom the publication dubbed "The Mona Lisa de Franzen" — is "a friend of the photographer's ... and wishes to remain anonymous." With the controversy Purity has already stirred up, that's probably a wise choice, but the designer's statement doesn't satisfy the Franzenites who are hungry for answers. As far as who the portrait is intended to depict, Corral asks, "[Is it] Purity a.k.a. 'Pip', ... or perhaps her mother?! It's up to you, the reader of course!"

Not everyone is wondering who is on the Purity cover, however. Since the book made its debut on Tuesday, Twitter users have been questioning every aspect of the cover design, from the blurry photo to the off-putting font stylings. Here's a selection of the best tweets yet.

So what do you think? Is Pip the woman on the Purity cover, or is that Anabel, her mother? Let's hear your theories!