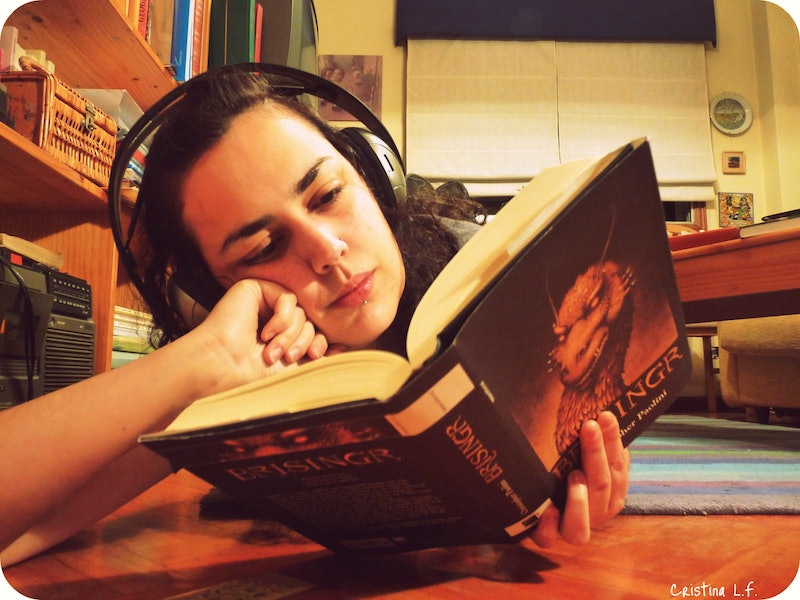 Although the debate over whether it's appropriate for adults to read YA novels still ostensibly continues (why, why, why?!), the truth is that no one who reads YA really cares what the naysayers think. Sure, there are plenty of terrible YA novels, but there are just as many bad literary ones. We know that a different label on the spine doesn’t make a great adventure novel any more gripping or a doomed romance any more heartbreaking.

YA's commercial renaissance started with Twilight, but its critical one undoubtedly started with John Green’s tearjerker The Fault in Our Stars, which proved that that it was possible for a teen romance to take on a serious topic without falling into the melodramatics of an after school special. As undeniably wonderful as Green’s novel is, what’s even better is the era of ever increasing diversity — in genre, characters, and style — its success has ushered in. There’s still a long way to go in terms of representation for writers and characters of color, but the last few years have seen a major shift towards inclusiveness and diversity.

Unsurprisingly, this new approach has opened the door for a flood of great novels about everything from a half-dragon musician solving a murder mystery to a conflicted teenager considering erasing his same-sex attraction. This list collects some great YA novels from the past five years that exemplify the exciting possibilities and general awesomeness of the genre.

We Were Liars By E. Lockhart

Twisty and propulsive, We Were Liars is the kind of novel you'll find yourself accidentally devouring in one sitting. Lockhart tells the story of Cady Easton, who, after suffering a mysterious trauma at her Kennedy-like family's island estate, returns to the island two years later to be reunited with her tightly knit group of cousins, the titular "Liars." Of course, not everything is quite as it seems, and the final twist delivers a gut-punch that left me staring slack-jawed at the wall for a solid hour after finishing the book.

Kissing In America By Margo Rabb

For a novel with "kissing" in the name, Rabb's book actually features surprisingly little romance — instead, it's focused on familial relationships between women. 16-year-old New Yorker Eva is still attempting to cope with her father's death in a plane crash when she meets Will, who helps her forget her grief — at least until he abruptly decamps for California. Desperate to see him again, Eva hatches a convoluted plan to get herself to L.A., involving a cross-country bus trip, a televised trivia contest, and a cast full of colorful characters. Rabb doesn't shy away from the difficult truths of loss and heartbreak, but she find hope and humor in all of it. This book will make you want to call your mom and tell her you love her.

In The Summer Prince, Johnson explores what a future run by women might look like: Palmares Tres, a not-quite-utopian-but-still-pretty-OK matriarchy located in future Brazil. The plot may sound boiler-plate — young artist June Costas and her best friend Gil both fall in with the Enki, the doomed Summer King, who exposes them to the less savory aspects of their society — but this fantastic novel leavens the YA sci-fi staples with a real thoughtfulness about science, politics, and art. It's a genuinely novel type of sci-fi story, one more concerned with art than with war.

Ms. Marvel, known out of her costume as Kamala Khan, is the first Muslim superhero to headline her own Marvel series. Even aside from its trailblazing status, Ms. Marvel has a lot going for it: a well-drawn heroine, fun cameos from characters like Wolverine and Lockjaw (a giant teleporting dog), and mile-a-minute jokes. Writer G. Willow Wilson beautifully captures the challenges of growing up different from those around you whether that's because of your Pakistani parents' strict rules, your own nerdy interests, or your weird new ability to shapeshift.

No list of YA novels would be complete without some dragons, and Seraphina delivers plenty, as well as a fantastic heroine, tons of court intrigue, and even a bit of romance. In a world where humans and dragons have only recently reached a truce after centuries of war, Seraphina is half-blood — a secret she must keep on pain of death. Still, her life as a court musician is simple enough until a prince is murdered under suspiciously dragon-y circumstances and she gets sucked into the mystery.

This two volume graphic novel tells the story of China's Boxer Rebellion from both sides of the conflict: a young man rises up against the Christian missionaries plundering his country, while a young woman finds safety and acceptance in Christianity only to be labelled a traitor by her people. Yang uses his sharp writing and instantly recognizable drawing style to narrate this historical turning point in a new and unique way.

Given how challenging anxiety can be to talk about (sample conversation: "I can't do that right now, sorry. I'm having a bit of a panic attack." "Oh no, what are you stressed about?" "Nothing, really. They call it generalized anxiety disorder for a reason, unfortunately." "So you're just, like, nervous?" "Oh god, I'm just going to go die now, bye."), it's remarkable how accessible Kinsella makes her protagonist's panic disorder. Audrey's struggles affect everyone around her, but with the help of her family, adorable love interest, and therapist, she muddles through.

More Happy Than Not By Adam Silvera

If you could erase the parts of yourself that set you apart, would you do it? This is the question at the heart of Silvera's novel, which chronicles the journey of Aaron Soto, a teenager dealing with depression, loss, and the dawning realization that he has romantic feelings for a guy. Be warned, this one isn't for the faint of heart, because, well, you remember Eternal Sunshine of the Spotless Mind, right? You are going to cry.

The premise of this novel is probably best described as bonkers: in medieval Brittany, a young woman, Ismae, flees from an abusive husband to a convent, where the nuns train her as a magical assassin. Despite its crazy story, LaFever's novel is surprisingly thoughtful about the true cost of violence, the brutality of patriarchal societies, and the difference between religion and faith.