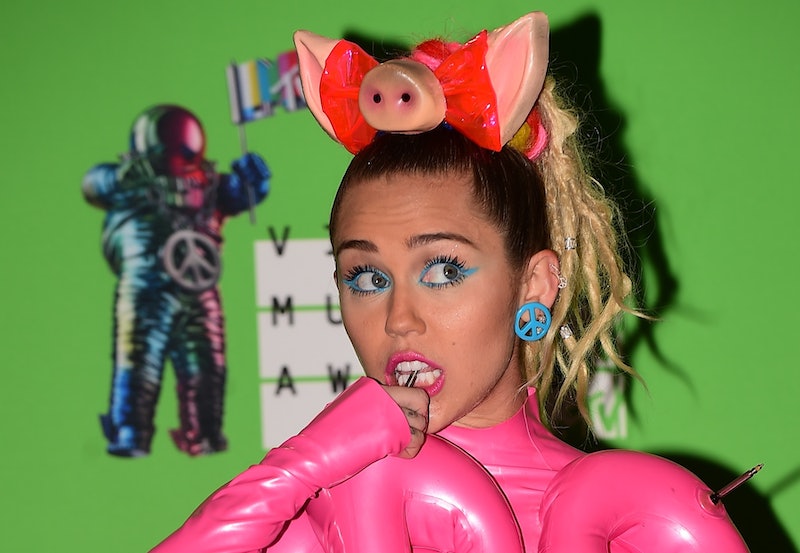 Well, here's a random and interesting celebrity pairing. According to Us Weekly, Miley Cyrus and Dane Cook are "hooking up." Apparently, the 22-year-old singer and the 43-year-old comedian are "longtime pals." Per Us, in 2013, Cyrus and Cook had an "impromptu dance party" at the Los Angeles club The Woods. Oh, and if you recall, when Patrick Schwarzenegger was spotted on spring break doing body shots off of another girl while he was dating Cyrus, she reposted one of Cook's Instagram posts. It read, "Don’t you ever let someone treat you like a yellow Starburst. You are a pink Starburst."

Well, I guess they were just destined to "hook up" at some point? Plus, they've been spotted together before. I mean, Cook did post this photo with Cyrus on Instagram in April. Some fans of the pop star might be super confused, because there have also been rumors that Cyrus and model Stella Maxwell are a couple. So... now she's "hooking up" with Dane Cook? Seeing as these are both just reports, who knows what the truth is.

Whatever the case, one thing remains certain: Twitter users, including Cyrus' fans, aren't feeling the whole Dane Cook thing. Actually, they pretty much find it disgusting. Social media users aren't holding back at all when it comes Cyrus and Cook's supposed relationship. Check it out: