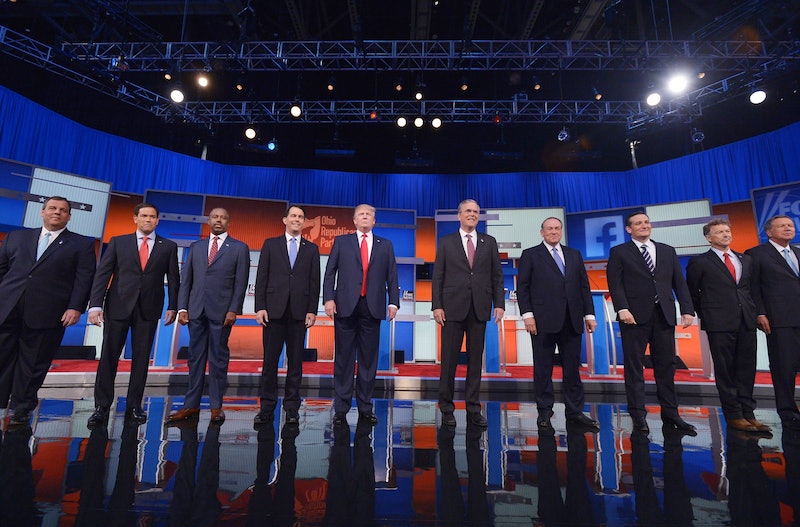 On Wednesday night, the second GOP presidential primary debate will air on CNN, featuring 11 different Republican candidates squaring off at the Reagan Presidential Library in Simi Valley, California. It figures to be a real gauntlet, as far as political debates go — it's scheduled to run for nearly three hours. So here's the big, obvious question: Do the candidates get bathroom breaks?

It's only natural to wonder, right? After all, standing under the searing lights of a debate stage for nearly three hours would be a physically draining experience under any circumstance, and presidential debates usually aren't chock-full of athletic, youthful people. National politics are generally an older person's domain, and with exhaustion already a consideration, who wants to have to additionally worry about having to pee? (I'll take it as a given that none of the candidates are reckless enough to show up needing to use the bathroom for the other reason.)

Well, here's the grisly truth: they'll have exactly one chance to duck into a restroom, and it won't last long. According to Politico, which quoted some campaign advisers talking about the "endurance test" the debate poses, CNN will only allow the candidates to relieve themselves during the third commercial break, and it will only last four minutes and 30 seconds.

In other words, the candidates should follow that age-old piece of parental advice: make sure you go before we leave. There's enough stress in contending with ten other, hostile political rivals without feeling that growing pressure in your bladder. Though in fairness, if Trump wanted to really make a bold statement that was in keeping with his political brand, he could just let it go right there on stage.