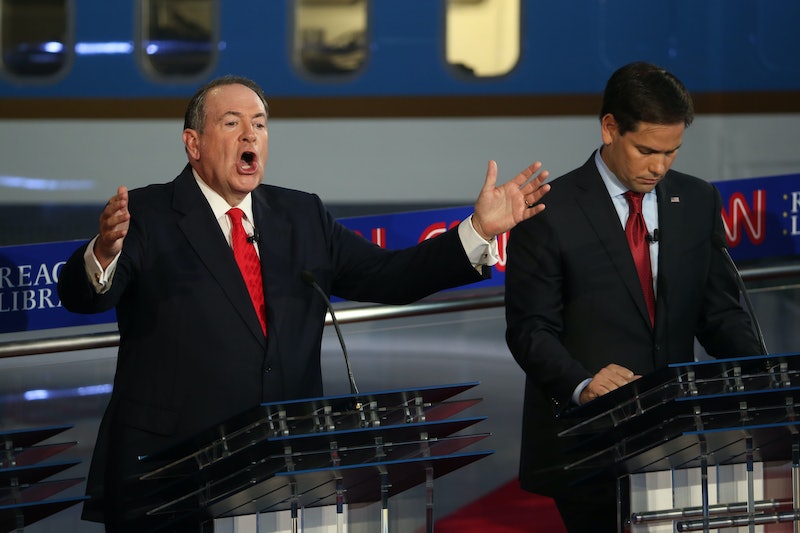 We all knew it'd be a long night. It's a Republican debate, after all, but still. This feels egregious. Tedious. Torturous. The first GOP debate was short and sweet, but this second GOP debate is so long, and everyone is pretty pissed. We Democrats have better things to do — like sell baby parts and let everyone and anyone in the country and ignore international terror — than sit around for three hours and watch Donald Trump, Ben Carson, Chris Christie, Marco Rubio, Carly Fiorina, and — hey! Is that Rand Paul? — "debate" for hours on end. I never thought I'd say this, but CNN is making me miss Fox News. And I'd never, ever thought I'd say this, but I agree with Trump: the network is "milking" this forum for all it's worth.

And no one is happy about it. Trump isn't happy. I'm not happy. Lord knows the viewer at home isn't happy and — whoa! Rand Paul is there! — you can bet he's not happy, either. Can you imagine standing on stage for three hours and only saying three words? It's like the sixth grade play all over again, only with more sweating and a lower base knowledge of foreign policy and women's rights.

If you, too, are feeling fatigued by the three hour debate, take solace in the below, then take a nap. Catch you for the closing arguments.

But there is one case for making the debate longer...