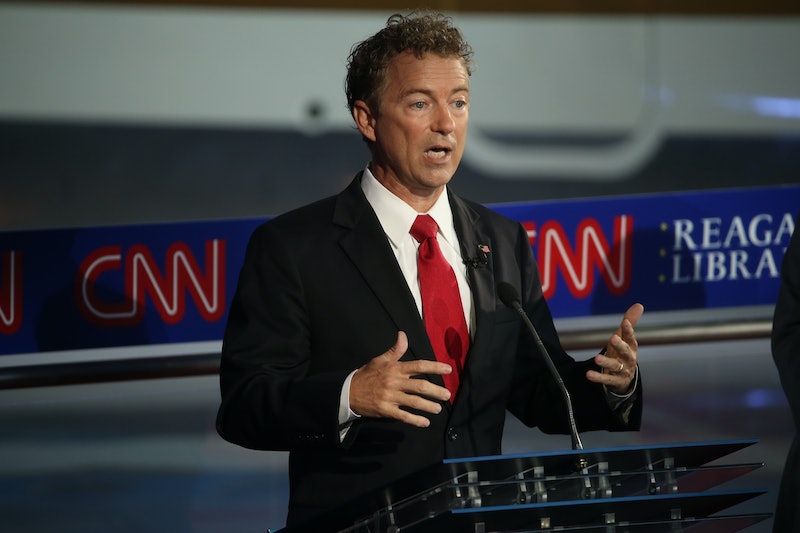 In an attempt to add some fun to the GOP debate on Wednesday, the moderators asked the 11 presidential candidates on stage, "What would your Secret Service code name be?" While some candidates took advantage of the less-serious question and answered more creatively — like Mike Huckabee's choice of "Duck Hunter" and Scott Walker's of "Harley"— Rand Paul's code name was "Justice Never Sleeps." Which is (sort of) perfect for the self-proclaimed defender of privacy.

While "Justice Never Sleeps" is a little long for a Secret Service name (and a little cheesy for real life), it's actually kind of fitting for Paul. The Kentucky senator's view of justice isn't one that's universally agreed upon, but he commits to the issues that he's passionate about, and spends all his energy trying to correct what he views as injustices. Most notable is his commitment to ending NSA spying — he hates that the government monitors Americans' cell phones, and has built a reputation as a pro-privacy politician. His campaign store even sells a "NSA spy cam blocker" that covers the camera on a laptop. Paul truly believes that justice never sleeps when it comes to protecting citizens' personal privacy.

Although Paul's code name is pretty fitting, it also sounds a bit creepy. I can't help but imagine Paul sitting in a dark room all night, holding a rifle, and waiting for an injustice to fight off, like a nocturnal vigilante.

People on Twitter thought it was an odd choice, and many pointed out the Batman reference, asking: "Is Rand Paul running for Batman?" Even if he didn't intend for his code name to mimic that of a superhero, he would probably enjoy the connection, as it only adds to his persona of defending citizens' rights.