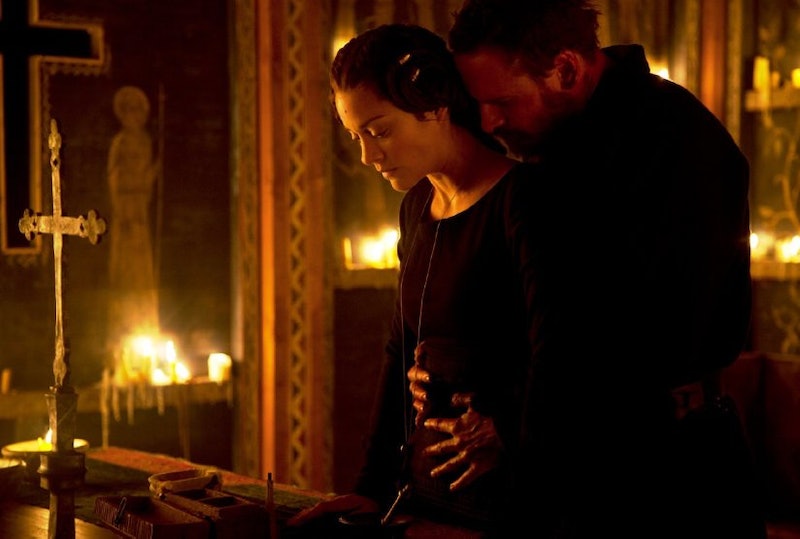 I hope high school English didn't ruin Macbeth for you, because its latest iteration is going to be truly incredible. Michael Fassbender and Marion Cotillard star as Lord and Lady Macbeth, respectively, with Elizabeth Debicki as Lady Macduff. Though some of the play's most harrowing scenes take place in bedchambers and the nooks and crannies of dank and unwelcoming castles, the new film — currently slated for an October release — takes place on the open battlefield. Early appearances are that it's a bold interpretation (and a Guardian review noted that it might not be the most subtle), with its share of thrills. A new Macbeth clip released earlier today via the Guardian shows Macbeth's early confrontation with the witches, played by Lynn Kennedy, Seylan Baxter, Amber Rissman, and Kayla Fallon, who portend his ascent to the Scottish throne.

"All hail Macbeth, that shall be king hereafter," the fourth and final witch tells Macbeth in the two-minute-long clip, setting in motion the chain of events that cause him to commit regicide, his wife to commit suicide, and his final (bloody) downfall — the tragedy keeping with any good Shakespeare classic. Though they have a relatively small speaking part in the play and film, these witches are really a focal point of the play, and here's why. Check out the clip below and a quick history lesson on why Macbeth is really all about the witches.

"All Hail Macbeth, That Shall Be King"

The line that concludes the clip is also the line that sets up what will come — as seen in the trailer, a whole crowd of Macbeth's underlings chant "All hail Macbeth" repeatedly. The witches were responsible, no doubt.

The three witches and their mistress Hecate (it's not totally clear from the early film preview which witch is which) prepare a potion in Act Four before Macbeth returns to consult with them once more on his fate. The incantation they murmur, "Double, double, toil and trouble, fire burn and cauldron bubble," is perhaps even more recognizable to Harry Potter fans as the words to one of the Frog Choir's songs in The Prisoner of Azkaban. The witches were responsible for that, too.

The Cult Of The Weird Sisters

The Weird Sisters (also a name of a band in Harry Potter, who plays at the Yule Ball in The Goblet of Fire!) — the triad of witches led by Hecate — existed even before Shakespeare incorporated them into his play. The three witches appeared in Hollinshed's Chronicles of 1587, which itself may have been influenced by Norse mythology. The history of Macbeth himself is also derived from Hollished's Chronicles, but the tragedy diverges pretty extensively from the historical record. The witches, though, have stuck together through interpretations.

English classes would have you believe that Macbeth's tragic flaw was his ambition, and while that may be true on an individual level, the witches definitely spur his conquest for power. With the simple utterance that he will be king, they plant the seeds of conspiracy. Macbeth's flaw was that he believed their words to be an incantation rather than a prophecy. He thought reign of Scotland was his for the taking and he ultimately pays the price.

The Witches Were Always In Control

In many renditions of the play, the witches are bystanders as much of the most brutal action goes down. Orson Welles staged a Macbeth set in Haiti where the Weird Sisters are voodoo priestesses, and they watch Lady Macbeth's sleepwalking scene and do not intervene as Banquo is murdered. Though Shakespeare's play is more ambiguous as to how much power the witches had over the course of events leading to the tragic culmination of the narrative, the witches have gained increasing agency with each subsequent performance.

Macbeth — like most of the Shakespearean cannon — is a play that profits from each additional interpretation. In the 17th century, witchcraft was a taboo subject, and witches were persecuted and often the objects of violence. But as the play has been performed and reinterpreted, the witches have reclaimed their narrative and gained increasing agency. Macbeth was always about magic and incantations, anyways.