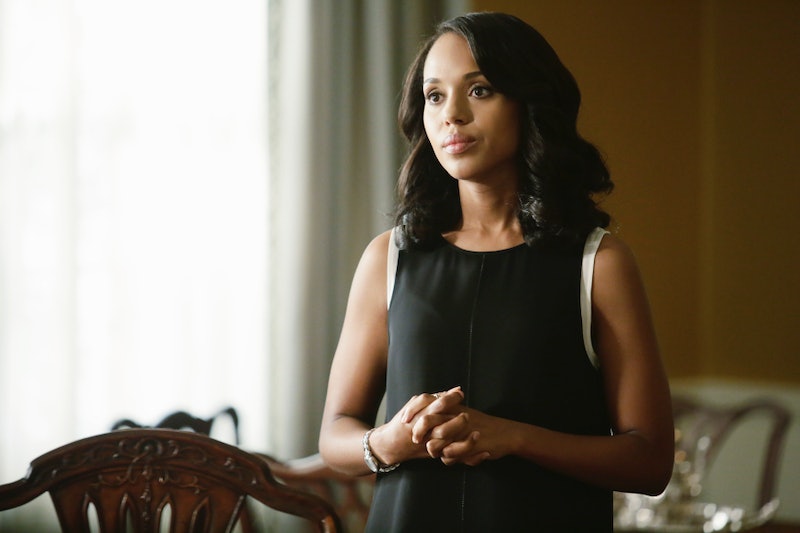 The jig is up, everyone. America (well, Scandal's America) officially knows about Olivia and Fitz having an affair, and the results aren't pretty. It all started when photos of Liv and Fitz got leaked to Sally Langston, perhaps the worst possible person to be clued in about what's going on behind the scenes, so of course, she immediately brought it up on her talk show. And as you can probably imagine, the entire country and the press went absolutely bonkers at the news that the president is sleeping with someone other than his wife — especially since they're not privy to all the issues in Fitz and Mellie's marriage. Thursday night's Scandal kicked off by outing Olivia and Fitz's relationship, and it caused problems for pretty much everyone.

Of course, rumors happen, but most rumors aren't substantiated by photographic evidence like this one. And both parties involved reacted about how you'd expect them to. Fitz decided to say absolutely nothing about what was going on, causing a media circus that was way too big for Abby to handle by herself, while Olivia handled it like a true adult, chugging red wine straight from the bottle, slapping on a baseball cap and burying herself in her work.

Unfortunately, it wasn't long before Olivia was recognized... or before the press started knocking down the White House door (and the door to Pope & Associates). The obvious solution (for both Mellie and Fitz) is to get FLOTUS back in the house so that she and Fitz can present a united front, but Fitz isn't having it — and the biggest question of all is who could be responsible for leaking the photos to Sally like this.

Remember that time Mellie and Fitz were getting a divorce? That might not be happening now if Cyrus and Abby have anything to say about it.