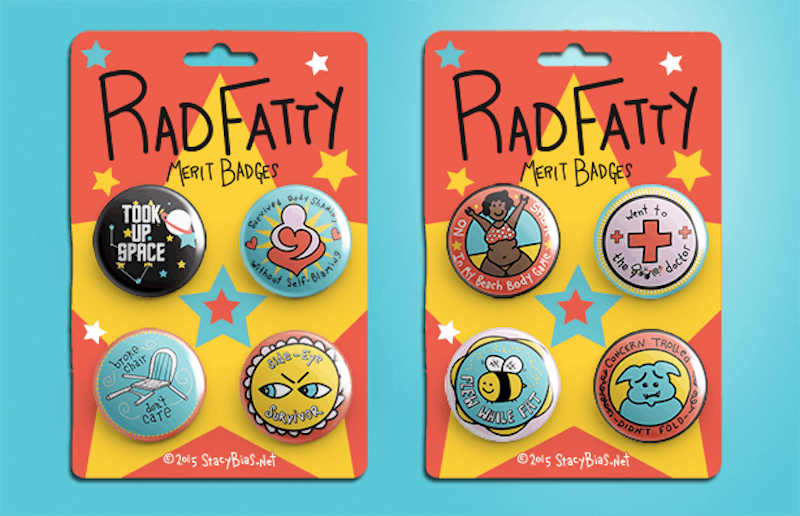 Unless you're particularly lucky, you've probably seen that horribly awful, terrible, no good "Dear Fat People" video that made its way around the interwebz recently. Stacy Bias sure did, and it inspired the activist and speaker from Portland to create a set of Girl Scout-inspired merit badges to fight fat shaming. They're called Rad Fatty Merit Badges, and they are officially the best.This is me, sending Bias a metaphorical fist bump for body positivity. Get it, girl.

Rad Fatty Merit Badges (short for "radicalized fatty") are a collection of eight stickers and buttons aimed at celebrating body positivity in a world that constantly tells us we shouldn't. "What happens is a seed gets planted — a seed of hate, a seed of shame, something that gets poked through a tender spot in my otherwise thick skin and takes root beneath the surface, digs its tendrils into the cracks in my foundation, and I start to question my intrinsic sense of self-worth," explains Bias to Bustle of how the collection came to be. "Sometimes, it gets big enough that I can finally see it — a spiky weed in my psyche — and once I know it's there, I have no choice but to yank it out, however awkward or painful it may be. So then comes an activist moment: an event, a website, an animation or, in this case, a set of slightly silly badge designs that celebrate the creativity and resilience that fat folks model every single day that they endure stigma."

So Bias decided to build something beautiful out of the ugliness of vlogger Nicole Arbour's hateful quote-unquote humor. "The deeply terrible 'Dear Fat People' video struck me as one of those things that could potentially plant that seed — in myself and others," Bias tells Bustle. "And that's what made me angry enough to act out. I was furious thinking about every person who was going to sit through that entire hateful rant and feel less convinced of their inherent value as a human being by the end of it. It felt like a slightly flippant reaction, the badges. Just a silly way to blow off steam. But clearly it struck a chord with others, and I'm grateful for that."

After receiving positive feedback from a few sketches she posted on her Facebook page, Bias officially launched the Rad Fatty Merit Badges IndieGoGo campaign with a modest goal of $625. She's currently hovering at mre than 500 percent of that, with a total of $3,555 and counting. Since Bias is, in fact, so rad, she intends to channel a large portion of those proceeds toward setting up an interactive website where fellow rad fatties can build on the body positive narrative. "If all goes well, it will launch in the next few weeks, and I hope that folks will use it to share stories with each other, celebrate their victories, and support one another. I have no idea where the project will go from here; I'm still reeling from where it's landed already," she says.

And because Bias is such a badass, she's been empowering women to be comfortable with the skin they're in since 2002 (in an official/professional capacity, that is). At first, she created a now-defunct queer website. She then launched the FatGirl Speaks event, organized the ChunkyDunk swimming rally, and runs BelliesAreBeautiful.com. In doing all of this, though, Bias strives to affect the lives of more than just fat people. She hopes that campaigns like these will help others gain understanding and acceptance of the oft-denigrated larger bodied population. The feedback she's getting over the badges encourages her to keep striving to that end. "I've had a couple of private message from folks saying the badges have reminded them not to be ashamed in moments they otherwise might have," she says. "There really can be no better feedback than that."

So, without further adieu, let's take a look at these fun designs celebrating those who are triumphing over sizeism on the daily by surviving shade like:

The last of which is Bias' personal favorite. "There is this sense that the job of fat people is to live every moment of their lives as an active apology for existing," she elaborates. "The vitriol directed at fat people who live without that apology is immense. I have been that woman with her head down, her shoulders hunched, her body curled in on itself, pressed against the wall with many a mumbled apology to anyone who passes."

She adds, "The goal of this badge is to acknowledge the strength it takes to stand up straight, breathe deep breaths, raise one's head, and be present in the belief that you've as much right to exist as any other being on the planet. Simple as that."

Yes to the ma'am. Get your own set of Bias's body-positive designs at the Rad Fatty Merit Badges IndieGoGo page.