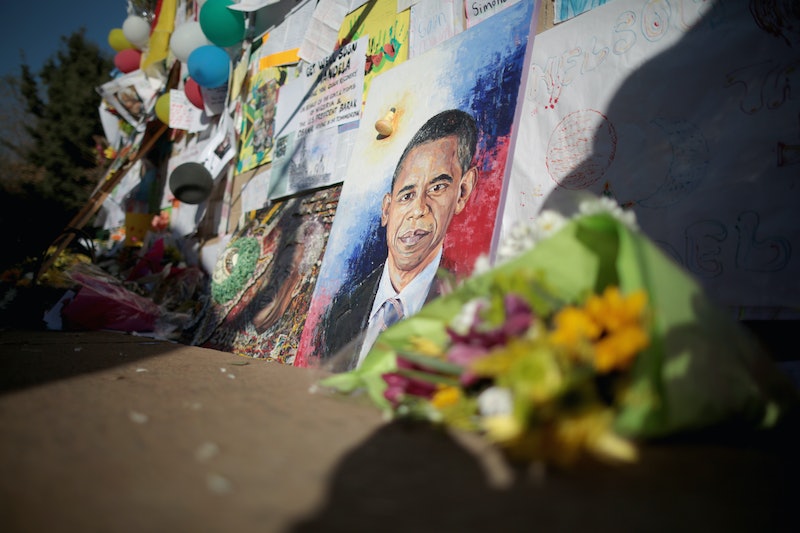 President Obama landed in Pretoria, South Africa late on Friday and affirmed that he will not be visiting the ailing Nelson Mandela in hospital, but he did meet with the Mandela family in Johannesburg on Saturday.

The President met with the hero's relatives privately and spoke to Graca Machel, Mr. Mandela's wife, by phone as she kept vigil by her husband's side.

Obama told reporters that he did not wish to impose on the Mandela family during this difficult time.

"The last thing I want to do is to be in any way obtrusive at a time when the family is concerned with Nelson Mandela's condition," he said to journalists on board the Air Force One as they left Senegal on Friday.

The White House confirmed this in a statement saying that "out of deference to Nelson Mandela's peace and comfort and the family's wishes, they [President and Michelle Obama] will not be visiting the hospital."

Hours after the President met with the Mandelas, anti-Obama protesters gathered outside the University of Johannesburg and clashed with police. So far, one person has been injured and another arrested.

Mr Mandela was taken to hospital on June 8 with a lung infection, and is currently acutely unwell. The former president is 94 years old.

Mandela's ex-wife, Winnie Madikizela-Mandela—who separated from Mr Mandela back in 1992 on the grounds of her adultery, as well as her multiple convictions of kidnapping and accessory to assault charges—said on Friday that she felt it would not be right for President Obama to visit Mandela while he was in a critical condition.

She also said that her ex-husband was looking better.

"I'm not a doctor but I can say that from what he was a few days ago there is great improvement," she said to the press on Friday.

The U.S. President will also visit visit Robben Island—where Mr Mandela was imprisoned for 18 years—on Sunday. He will finish his African tour in Tanzania.

More like this
Jude Bellingham’s Superstar Football Talent Runs In The Family
By Maxine Harrison
Kate Middleton & Prince William Were Booed & Mocked On Their U.S. Visit
By Jake Viswanath
Here's The Role Lady Susan Hussey Played At Buckingham Palace
By El Hunt
Kate Middleton Shares The Key To Building A "Happier Society" In A New Op-Ed
By Stephanie Topacio Long
Get Even More From Bustle — Sign Up For The Newsletter