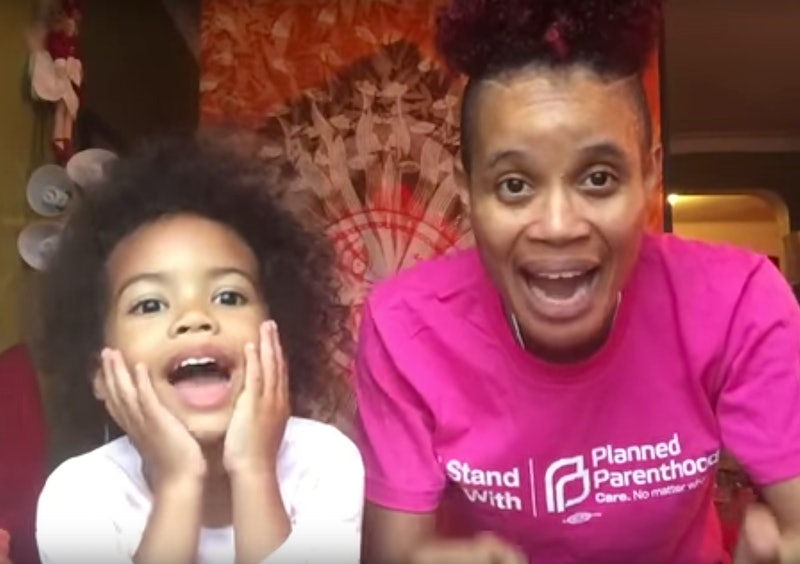 I love this: Here are a toddler and her mom who support Planned Parenthood and aren't afraid to say so. The mother is Staceyann Chin, a poet and activist, but it's her adorable daughter Zuri who gets right to the core of it in Chin's latest video for her webseries, LivingRoomProtest — she says she supports Planned Parenthood "'cause we have our own body. We can do everything with our own body." A toddler knows this, but Congress doesn't, people. Just... think about that for a minute.

God bless Zuri, honestly — she's spoken out for Planned Parenthood more than I have in recent weeks. Maybe it's cowardly, but when I think about the ongoing Conservative campaign against Planned Parenthood, I alternately get too angry or too sad to speak. Planned Parenthood was literally what I listed as my primary care provider on college forms — I went to them for everything. I'm not sure that men can appreciate how closely women's health is tied up to the health of their sexual organs: Many women go to the gynecologist more than any other type of doctor (apart from maybe the dentist?) — and gynecologists, in turn, can seemingly provide general medical advice on everything, even non-sexual problems like bad eating and sleep habits. (When I speak of sexual problems, I'm talking about biological sex problems — many women, myself included, start going to the gynecologist before they ever have sex.)

Again, although we really shouldn't have to justify it by other services in the first place, Planned Parenthood is more than just an abortion provider. Planned Parenthood gives people easy and inexpensive access to different kinds of birth control (a great way to lower abortion rates, by the way), cancer screenings (I went to Planned Parenthood after I found a lump on my chest in college), screening for STDs including AIDS, and annual exams that include things such as vaccinations and Pap tests. It helps all women (and some men, too!) have healthy, safe lives — and that includes little kids like Zuri, who will grow up and need to take care of her "little boobs" (as she proudly points out) and female body to keep herself happy and healthy.