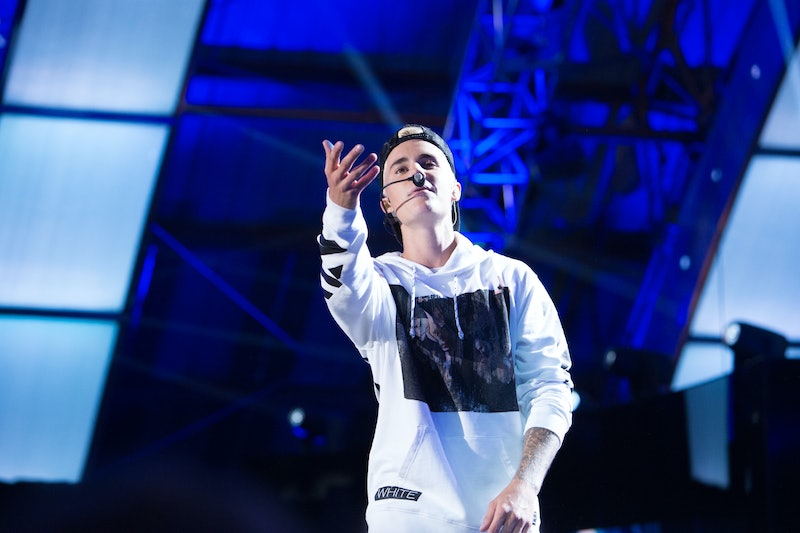 OK, by now you probably know that naked pictures of Justin Bieber have leaked to the press, and, by extension, are now all over the internet. The story goes that some paparazzi snapped the pics of Bieber while he was on vacation with girlfriend Jayde Pierce in Bora Bora, and it was a total invasion of privacy. That doesn't explain, though, why Saturday Night Live seems totally obsessed with Bieber's penis.

Multiple sketches from the Amy Schumer-hosted episode referenced the photos. Michael Che and Colin Jost discussed it at length (no pun intended) on Weekend Update. Then, in a different sketch about a town council-type meeting where the joke was that the citizens were asking irrelevant questions, Pete Davidson asked the council if they'd seen the pics—you know, just because he was curious.

There isn't anything particularly funny about just the idea of seeing Bieber naked, and it's not even a particularly newsworthy event, so the fact that it became the punchline to a joke in multiple sketches was kind of low for Saturday Night Live. The thing is, the pictures are an invasion of privacy, no matter who they're of. Bieber wasn't showing his junk out in public — he was in a place where there was a reasonable expectation of privacy. And yet, the jokes weren't at the expense of the photographer, the jokes were at the expense of Bieber's body. Not cool.

If Bieber were a woman, this would be less of a joke overall. It'd be super-creepy to make fun of it. It shouldn't be any different just because Bieber is a guy. He deserves the same control over his body, and if people invade that privacy, it shouldn't be a joke. SNL was funny on Saturday, but the Bieber jokes were not.

More like this
Justin & Hailey Bieber's Bond Is "Unbreakable" Amid His Ramsay Hunt Diagnosis
By Bustle Editors
Twitter Has *A Lot* To Say About Justin Timberlake’s Beat Ya Feet Dance
By Sam Ramsden
Selena Gomez Is Fine Being Single, But She Still Manifested Romance On 'SNL'
By Martha Sorren, Jake Viswanath and Jack Irvin
Tanya Burr Is Expecting A Baby With Her Mystery Partner
By Maxine Harrison
Get Even More From Bustle — Sign Up For The Newsletter