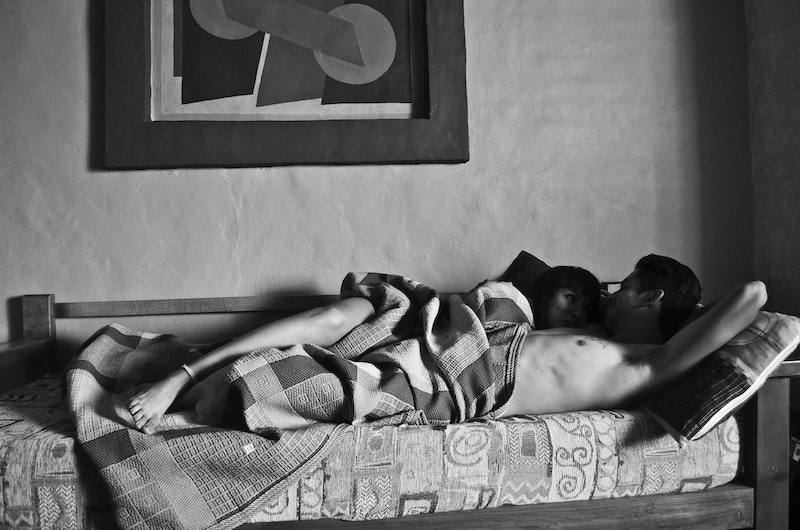 Here's some fun news to help you make it through this Monday, ladies. If you're a happily coupled up hetero woman and your man hops into bed tonight wearing anything other than his birthday suit, tell him to strip it down. Aside from the obvious benefits this might net you (wink wink, nudge nudge), new research reveals men should sleep naked lest their sperm quality take a serious hit. Not that most men need any additional motivation to get naked, but knowing they might unwittingly be strangling their little swimmers should do the trick.

According to a study performed by the National Institute of Child Health and Human Development in conjunction with Stanford University, the type of underwear a man wears to bed affects the quality of his sperm. The study followed 500 men for a span of up to 12 months, monitoring the correlation between type of P.M. underpants and sperm function. (Sidebar: How, exactly, might one list those job responsibilities on a resume?) Their findings showed that men who opted for loose-fitting underwear during the day, i.e. boxers, and went naked at night had 25 percent less DNA fragmentation in their sperm compared to the fellas who are tighty whitie wearers day and night. Explained the lead author of the study, "Reducing exposure for bed decreases DNA fragmentation, and better quality parameters are observed in men wearing boxers during the day and none in bed."

Ya hear that, menfolk? Let your boys breathe. And by boys, I clearly mean your balls. To help break down the hierarchy of sperm-supportive PJs, I've compiled a quick, yet definitive ranking of undergarments to A) wear at night if you're a dude or B) remind your dude to wear or, ahem, not wear at night. This will prove mutually beneficial in the long run if you hope to one day start a family with your beau.

Despite how gosh darn adorable your guy's bum looks in a classic pair of form-fitting Fruit of the Looms, this type of underwear may not be so kind to the fruit of his loins, if you catch my drift. There is plenty of data to back the theory that tight underpants do a number on sperm motility and condition, which causes infertility.

4. Sweatpants or Other Cozy PJ Bottoms

The problem with sweatpants lies within their very name — sweat. As in, they'll make you sweat and, more specifically, they could give men schweddy balls. Why is this a problem? Because science has drawn a link between men increasing the temperature of their testicles and poorer semen quality. The only reason they rank lower than tighty whities is because they are looser. That has to count for something, right?

In relation to boxer briefs, Carrie Bradshaw's words keep ringing in my ears, "You can’t be friends with a squirrel! A squirrel is just a rat with a cuter outfit." 'Cause, let's be real, boxer briefs are basically just tighty whities with some flair. And, much like tighty whities, wearing this type of underpants — regardless of how alluring Calvin Klein billboards make them seem — can basically be considered venturing into enemy territory for the testes.

If a man wants to wear something (anything!) to bed, boxer shorts are generally considered by scientists and other fertility jedis to be the best garment to keep sperm at a safe temperature and do the least amount of reproductive damage possible. During the day, guys should definitely opt for loose-fitting boxer shorts underneath their pants.

If science says we should all sleep naked, who are we to argue? Who would even want to? Sleeping naked feels amazing. Plus, as it turns out, it also does amazing things for both men and women's bodies. In addition to boosting men's sperm quality, snoozing in the buff offers benefits like prompting the release of anti-aging hormones, helping you get a better night's sleep, and minimizing surges in cortisol and hunger hormones. Let's not forget oxytocin, either — skin to skin contact spikes this "love hormone," which leads to more sexual responsiveness and better orgasms. Yes, please!

More like this
How To Protect Your Digital Privacy If You Need An Abortion Post Roe v. Wade
By Kaitlyn Wylde
I'm 42 & I've Never Had Sex. Is It Too Late?
By Sophia Benoit
5 Crystals For Anxiety
By Megan McCarty
5 Crystals To Manifest Better Sleep
By Megan McCarty
Get Even More From Bustle — Sign Up For The Newsletter