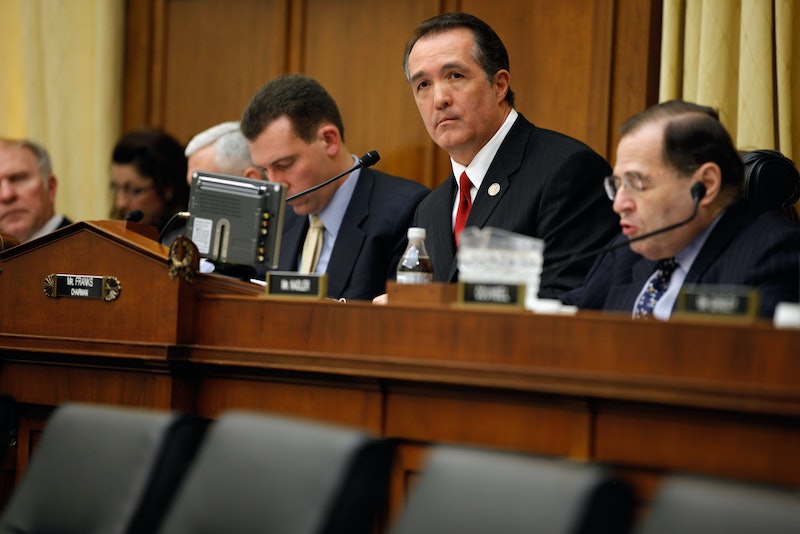 A House subcommittee of ten congressmen met on Tuesday to deliberate on those topics men know best: pregnancy and abortion. The Subcommittee on the Constitution and Civil Justice was considering the Pain-Capable Unborn Child Protection Act (H.R. 1797), a bill that would put a nationwide ban on all abortions after the twentieth week of pregnancy. The bill would exempt mothers whose lives are in danger, but not victims of rape or incest. Rep. Trent Franks (R – AZ), who chairs the subcommittee, was the bill's lead sponsor.

The committee voted along party lines, with 6 Republicans voting for the bill and 4 Democrats against it. Next, the bill will face the full 40-member House Judiciary Committee.

This is Rep. Franks' second and far more ambitious attempt to pass the Pain-Capable Unborn Child Protection Act. The original version of the bill (H.R. 3803), which would have taken effect only in the District of Columbia, failed in a House vote last July.

Rep. Franks' newfound confidence in the expansion of his bill comes on the heels of the recent conviction of Kermit Gosnell, a Philadelphia abortion provider who was found guilty for the murder of three infants after their late-term abortions accidentally resulted in live births. "The trial of Kermit Gosnell," Franks said in a statement, "exposed late abortions for what they really are: relocated infanticide." Pro-choice activists insist that Gosnell's activities bear no resemblance to the practices of the many clinics that operate under safe and legal conditions.

This week's all-male deliberation process is uncomfortably reminiscent of an episode that occurred during a debate on the DC version of the bill. Rep. Eleanor Holmes Norton (D-DC) was barred from testifying at a hearing on the measure, despite the fact that it would only take effect in her specific district. In retaliation, she held a press conference of her own, where she stood side-by-side with a woman who had aborted a fetus with severe brain defects at 21 weeks.

Rep. Norton released a stern statement following the introduction of Franks' new version of the bill last month, warning that, "Now that the Franks bill will expressly target all U.S. women, we can expect an even stronger national response to this attack on women’s health."