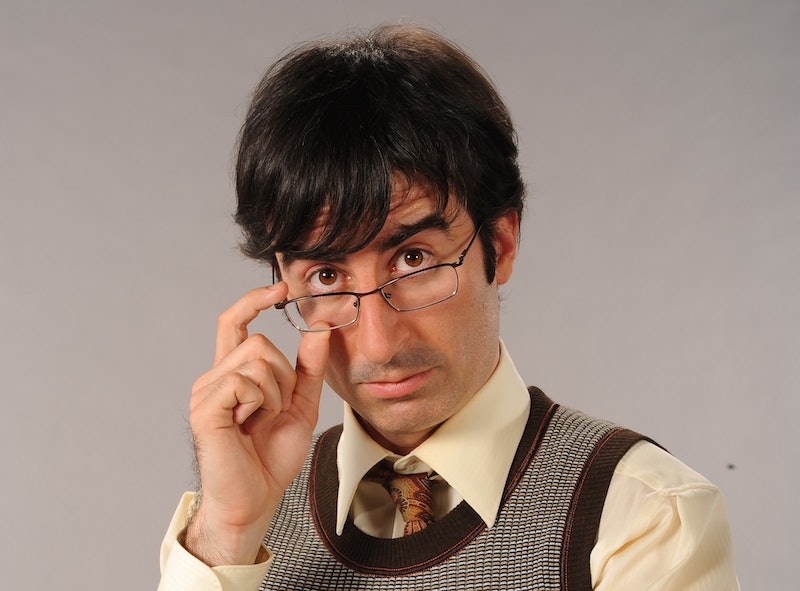 American comedy’s favorite Brit John Oliver is already being missed on The Daily Show with Jon Stewart. We miss his snarky English wit. We miss his unabashed shaming of word-vomiting politicians. Most of all, we miss the danger. His new comedy show on HBO still doesn’t have an air-date or even a name so we’re really going through withdrawal here. Well, good news! Oliver's return to Community , which was announced last September, is happening very soon. This Thursday Jan. 9, he will resume his role as Professor Ian Duncan on the NBC series— and in the most fitting way possible.

As we saw in Oliver’s farewell reel on The Daily Show, his humor isn’t always… highbrow. Well, Community is clearly the right show for him because this week’s episode (and apparently five more) will center around the investigation to find the “buttcrack bandit” who is running rampant at Greensdale Community College. Some asshole is going around dropping quarters into people's exposed rear ends, traumatizing the innocent and vulnerable as seen here:

The fiend! Greensdale students Jeff Winger (Joel McHale) and Annie Edison (Alison Brie) decide to take matters into their own hands and find out who's behind the anus (sorry, I mean heinous) crime. We don't know much about what part Oliver will play in all of this. Presumably, he is one among many staff members being questioned by Winger and Edison. But is he the culprit or will he just become another victim to fall prey to the bandit? I guess we'll find out soon enough.

In the meantime, can we just rewind and examine how absurd this whole thing really is? I mean shit! As Oliver observes in a Community web exclusive, "That's a group of adults making that television. That's an adult thinking of it, other adults helping them write it...and then adults performing and shooting it. That's what adults are doing with a week." That's either worrisome or brilliant.

To hear more from Oliver, McHale, and Brie, check out this clip of Community: Between the Takes.