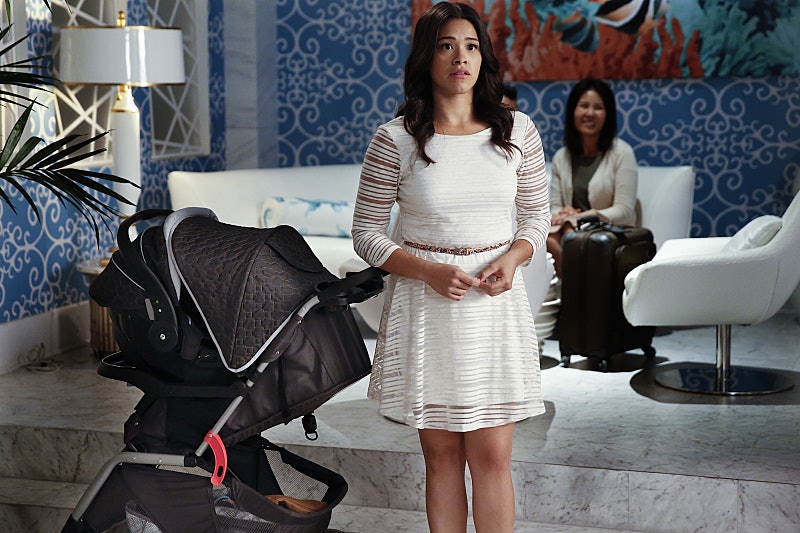 There really is never a dull moment on Jane the Virgin. It feels like only yesterday we got Mateo back safe and sound and already these beloved characters now have yet another abduction on their hands. Well, to be fair, I'm not entirely sure if this qualifies as an outright kidnapping, but considering that Nadine currently had Michael at gunpoint at the end of Jane the Virgin , I'd say there's at least a little cause for concern. Remember back in the Season 2 premiere when Michael let Nadine go free and handed over the dragonfly broach (containing all of Sin Rostro's identities) in exchange for Mateo's safety. Well, a big part of that story came to light this week and inevitably led to Michael getting fired from the police force.

But while we originally thought Rafael was behind turning him in, it was actually Nadine's friend who had ratted Michael out. Why? Who knows really, but maybe it has something to do with the reason Nadine has now taken Michael hostage. Clearly, this girl has been running with the wrong crowd for quite some time, though, to be fair, I don't think it's something she exactly relishes doing. Deep down, she really does care for Michael, so I don't think he'll actually come to any harm. But that still makes the entire situation pretty dangerous. Because while she may not be willing to hurt him, she may be taking him to people that are.

Then again, maybe she's decided to turn into a double agent of sorts and help Michael go undercover and bring Sin Rostro to justice once and for all. Either way, though, now that things with Jane are more rocky than ever, Michael might dive even deeper into this investigation, no matter how dangerous it may be. Let's just hope that, whatever it is that Nadine wants with Michael, that she turns out to be a friend rather than a foe. The poor guy had a hard enough day as it was.