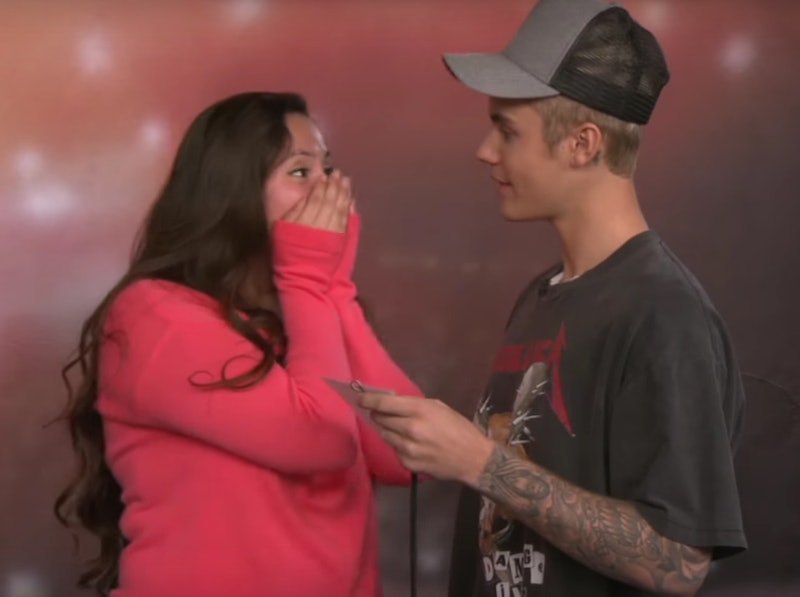 We might have reached Peak Bieber — and I mean that in the best way possible. Justin Bieber's Purpose drops on Nov. 13 and the singer is hard at work promoting it. His latest venture involves him surprising fans and — spoiler alert — it's exactly what we need from Bieber. Of course, Ellen DeGeneres was behind the antic, bringing superfans to her studio where the singer snuck up on them just as they were going on about how they love him. Cue overwhelming reactions everywhere.

Naturally, the range of emotions was all over the place. From screaming to hugging to straightforward disbelief, the Beliebers collectively could not handle being in the presence of the "What Do You Mean?" singer. Totally understandable. Anyone who experienced the extreme longing of being a music fan gets what these Beliebers went through. As hilariously sweet as this video is, it's a very important reminder of where the singer is in his career and why this album is so important.

We've seen a lot of ups and downs from Bieber. When "Baby" took over the airwaves many moons ago, he was just a saucy teen with an over-abundance of confidence. As his career grew, so did the questionable behavior, leading to a hit to the singer's reputation. He's fought to rectify his image in the public eye and this video proves he's earned all of his recent praise.

Purpose promises to be one of the best albums of Bieber's career. He's been getting rave reviews for the singles he released already. The tracks show his maturity, while highlighting the vocals that shot him to fame so many years ago. However, this sweet side of Bieber is just what we need. We've seen successful, cocky Bieber. What I want is successful, humbled Bieber. And, if this video is an indication, that's exactly what we're getting.