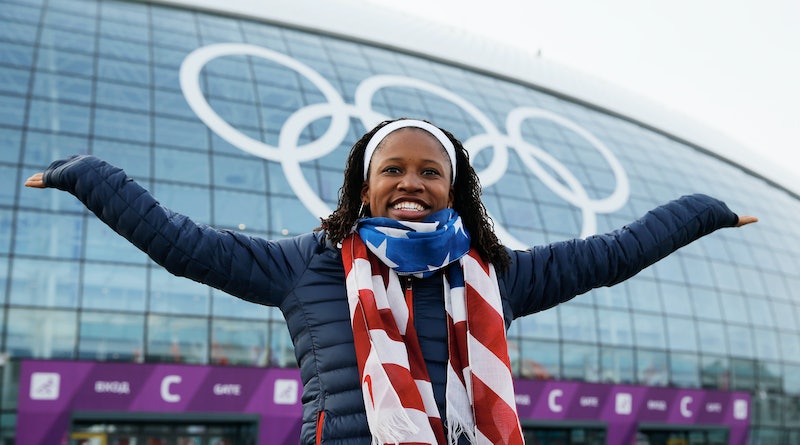 Lauryn Williams is not the first Olympic runner to switch over to a winter sport, but she might be the most unlikely. After the myriad victories she collected as a track star, she was forced to retire in 2013 due to an unfortunate injury. However, soon after her decision to leave professional sports, she picked up bobsledding in July 2013. Now, less than six months later, Lauryn Williams is a Winter Olympics contender for bobsledding, and may join the U.S. team in Sochi this February. Right now, she is one among six women who will compete for the three available spots in the games, which will commence on Feb. 7. If you haven't gathered from all that, she's pretty awesome. Even if she doesn't make it into the team this year, she's bound to remain an formidable presence in the athletic community.

Here are a few things you should know about this potential bobsled champion.

She’s no newbie to athletic success

Before joining the U.S. bobsledding team in October, Williams competed in the 2004 summer Olympics, the 2008 Beijing Olympics, and the 2012 London Olympics. Her participation in the 4x100 relay in 2012 won her the gold medal, while her performance in the 100-meter dash in 2004 won her the silver. Aside from these Olympic victories, she also won an impressive array of medals in competitions like the World Outdoor Championships and the Pan Am Junior Championships. Maybe she'll add some bobsledding awards to her roster in the near future.

Standing at a mere 5'3", Williams is one of the shortest Olympic runners from the United States. Her most competitive peers tend to measure in the 5'6" to 5'7" range, so she was initially a dark horse when it came to possible Olympic victories. However, her height hasn't stopped her from becoming one of the fastest women in the world. Her legs moved at lightning speed and ran her all the way to victory on countless occasions. This just acts as a testament to her determination and strength of character; in fact, her motto seems to be "Hard work knows no limit."

As a professional athlete, Williams obviously takes great care of her body through proper training and diet. On her series of fun-fact-filled Twitter posts "My name is Lauren Williams and I..." she admitted her love for food, claiming to be a "HUGE foodie" who loves Whole Foods and healthy eating. Come on, you're making the rest of us foodies look bad! Williams even put up an adorable picture of her trip to the supermarket, saying "It may actually be the most awesome place on Earth."

She started bobsled with a hurt leg and no prior experience

...and then she won third place in the U.S. National Push Championships. Again, it just proves what a talented and hard-working individual Williams really is. As we mentioned before, a serious leg injury left her unable to race and had led her to plan an early retirement from athletics in 2013. According to the Post-Gazette, Williams was understandably disappointed, so she jumped at the opportunity when Olympic hurdler-turned-bobsledder Lolo Jones suggested that she try her hand at two-woman bobsledding. She would attempt to become a "brakeman," a position that would require the speed and power to give the sledder enough acceleration. It was only after a week of training that she showed up at the Push Championships in Calgary and took home the third prize.

All this said and done, success has not gone to Williams' head. Jones described her in a conversation with the Associated Press,

"She's very humble. I was like, 'Oh, gosh, I'm going to regret recruiting her if she beats me out for the team.' But I have a lot of respect for Lauryn and I just couldn't see her taking a stab at it. She already has the gold and the silver. I told her she's losing nothing and just go for it."

Williams is also known for her loving treatment of fans. According to her website, she always takes the time to talk to children and supporters. And just look at that contagious smile; we can tell she's the sweetest person ever.