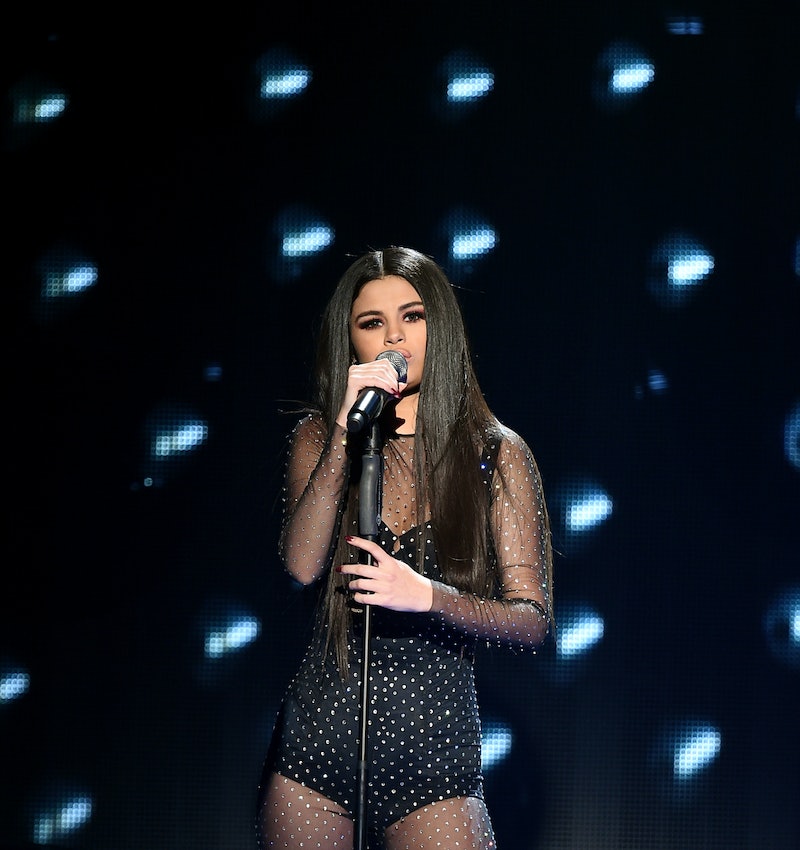 The media's been having a field day speculating about the current status of Selena Gomez and Justin Bieber's relationship, but it's so important to remember that she easily stands on her own as an incredibly talented performer and inspirational human being. When Selena Gomez performed "Same Old Love" at the American Music Awards, I wouldn't have been surprised to see the camera pan to Justin Bieber every five seconds — and that would have been super frustrating, because she's so much more than who she is or isn't dating. But, instead, when the cameras cut to the audience they chose to focus on Gomez's female pals who were there supporting her. Julianne Hough, Hailee Steinfeld, and Fifth Harmony looked like they were having a blast as they cheered on their friend and danced to her hit song.

Gomez hasn't had the easiest year, so it was inspiring to see her on stage doing what she does best — and not letting health problems or media rumors get in her way. Dressed in a sparkly body suit and floor-length black coat, Gomez didn't miss a beat as she belted out "Same Old Love." She's a strong singer, dancer, and overall performer — and she most definitely does not need a guy to make headlines. Bringing the focus to Bieber would have been disrespectful to Gomez's many merits and all the hard work she's put into building an amazing career.

Society and the media are so quick to immediately associate women with the men they're romantically linked to — and the cost is that their own talent often takes a backseat. It may seem like a small gesture, but the camera operators at the AMAs deserve major props for recognizing that Gomez's performance was about showcasing her talents. Bieber will have his time in the spotlight this evening, but I'm so glad it wasn't at the cost of distracting viewers from Gomez's amazing performance.