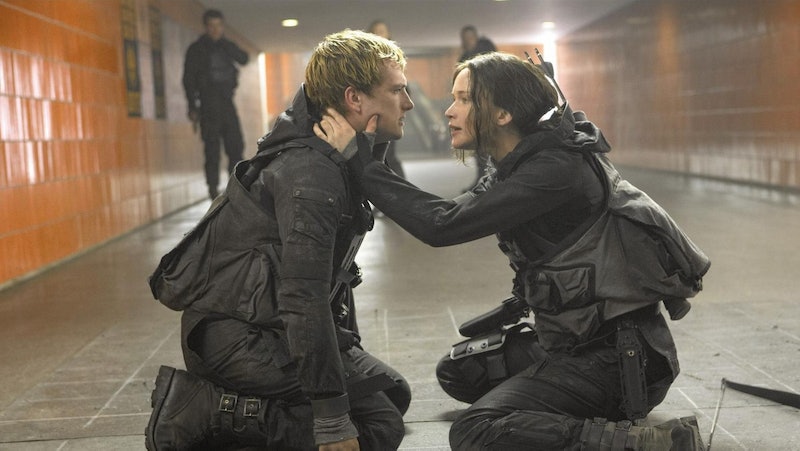 Friends, if you are on Team Gale, I highly recommend you turn back now. The great ‘ship Katniss Everdeen and Peeta Mellark (aka Everlark) may not be the only couple who matter in The Hunger Games universe — shout out to Haymitch and Effie — but they’re the beating heart of the story. It’s all right there on the page and in the script. The Hunger Games series is full of quotes proving Katniss and Peeta are meant to be together.

I was all-in on Everlark from my first read of the original Hunger Games novel, when Peeta divulged a crush that was more than just a way to curry favor from potential Capitol sponsors. And let’s face it, Gale has always been a little too possessive to suit a strong spirit like Katniss. Marketing and fan factions may have pumped up the Team Peeta/Team Gale drama while the books and movies were still in production, but both versions of Mockingjay have Katniss and Peeta’s happiness as endgame. These quotes from the books and the movies prove that they were destined from the start.

1. "To this day, I can never shake the connection between this boy, Peeta Mellark, and the bread that gave me hope, and the dandelion that reminded me that I was not doomed."

Peeta has been protecting Katniss for most of her life. He showed her kindness when she sorely needed it, and she'll never forget what he did for her family.

Katniss is slower to feeling a physical pull than Peeta, largely because romance and romantic love didn't fit into her life in District 12. (Much to Gale's chagrin.) But once she does, the chemistry is there. And her warm feelings for Peeta begin to take on a more heated quality.

For as nightmarish as their ordeal in the Games was, Peeta doesn't want to dismiss the connection that he and Katniss found along the way.

4. "My nightmares are usually about losing you. I'm OK once I realize you're here.”

Even caring for someone this much can be a little selfish. Peeta sees no point in carrying on without Katniss, which means that it's very much their mission to keep each other going.

Peeta is always questioning, because he believes that he loves Katniss more than she loves him. And maybe she's not ready to say those exact words in Catching Fire, but she does debunk his theory that he's not necessary to her.

7. "You will rescue Peeta at the earliest opportunity, or you will find another Mockingjay."

Katniss won't shoot one propo with Coin's PR team until her soulmate is safe and sound.

8. "I drink in his wholeness, the soundness of his body and mind. It runs through me like the morphling they give me in the hospital, dulling the pain of the last weeks."

Seeing Peeta alive after believing him dead for so long is literally like a drug to Katniss.

9. "You're a painter. You're a baker. You like to sleep with the windows open. You never take sugar in your tea. And you always double-knot your shoelaces."

Katniss reminds Peeta of who he is when he's recovering from his hijacking. It's the most compassionate thing she can do. And he realizes that she's been paying much for attention than he thought.

Peeta believes that he's a ticking time bomb to Squad 451 and not worth the faith they're putting in him. Katniss says that's nonsense.

So real. Too real. The realest.

And now, I need to lay down and cry for a bit. Katniss + Peeta forever, xoxo.

More like this
'The Sandman’s Ending Is A Departure From Neil Gaiman’s Comic Book Series
By Kadin Burnett
The Biggest Differences Between 'Bullet Train' & The Book It’s Based On
By Arya Roshanian
I've Read The Harry Potter Books 30+ Times & This Plot Hole Haunts Me
By Kelsey Stiegman
10 Must-Read New Books Out This Week
By K.W. Colyard
Get Even More From Bustle — Sign Up For The Newsletter