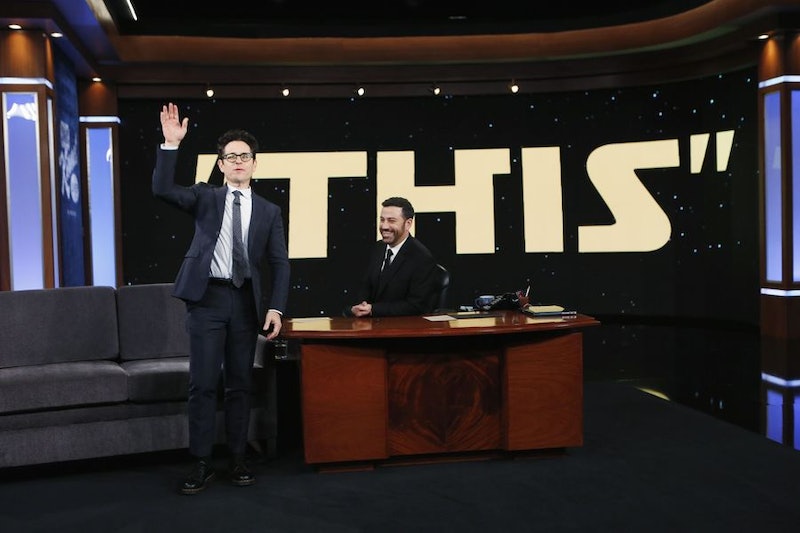 The release of the new Star Wars film, Star Wars Episode VII: The Force Awakens , on Dec. 18 will be the biggest blockbuster event of the year, and may go down as the largest blockbuster event of the decade. But with so many fans already excited for the movie, I was surprised to hear J.J. Abrams reveal he was reluctant to direct Star Wars Episode VII during Monday night's special edition of Jimmy Kimmel Live! It turns out, he wasn't always on board with bringing the latest film in this legendary franchise to life.

Abrams explained to Kimmel that when he was initially approached by Bob Iger, Chairman of the Walt Disney Company, to direct Star Wars, he was "reluctant" to accept the job. He said, "the idea of getting so close to something kind of scared [him] a little bit." By Abrams' account, Disney was incredibly enthusiastic about him as a director, and very persistent in signing him on to the project. Despite his initial hesitation, once Abrams sat down and began to share ideas for the new film with a Disney executive, he became excited about the opportunity. All it took to seal the deal was for the executive to say, "If you pass this up, you'll probably regret this for the rest of your life." Clearly, Abrams agreed.

While fans of the original Star Wars series have set a high bar for Abrams to surpass, he seems happy with his decision to tackle the challenge of adding onto a beloved franchise. And at the end of their interview, Kimmel reassured the director that he's heard people who already saw The Force Awakens give it a ton of praise. I'm sure that by the time everyone else has finally gotten to see Star Wars Episode VII, Abrams will forget he ever had any doubts.