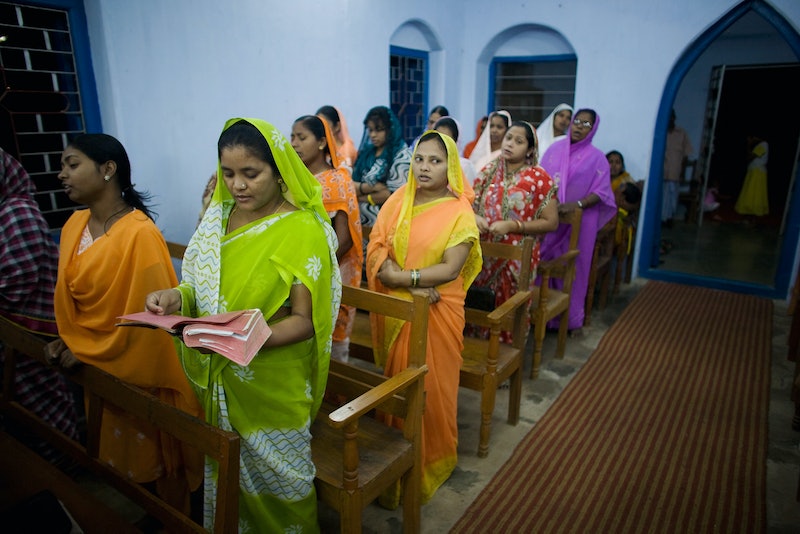 After a woman was brutally gang-raped and disemboweled on a New Delhi bus in 2012, the people at Rattapallax used their production platform to fight back. They published a graphic novel, Priya's Shakti , to address gender-based violence (GBV) from a Hindu perspective.

Priya's Shakti follows Priya, a Parvati devotee who calls out to her Goddess after she is raped — and she's kicked out by her parents as a result. Appalled by the treatment Priya has received, Parvati enters her consciousness, only to find that deeply-entrenched ideas about GBV have made justice nearly unattainable. Once Parvati's husband, Lord Shiva, gets into the mix, it's up to Priya to smash the patriarchy in order to save the world from the God's vengeance.

The comic may be tailored to an Indian audience, but it addresses a global phenomenon that affects one in three women worldwide. GBV is not unique to Southeast Asia and the Middle East, and those societies are not devoid of woman-centric stories of female empowerment. Quite the contrary, in fact. Rattapallax says that Priya's Shakti "is rooted in ancient matriarchal traditions that have been displaced in modern representations of Hindu culture."

According to the United Nations Population Fund, GBV "[v]ictims ... can suffer sexual and reproductive health consequences, including forced and unwanted pregnancies, unsafe abortions, traumatic fistula, sexually transmitted infections including HIV, and even death." GBV includes rape, sexual abuse and harassment, trafficking, mutilation, and any other "violence perpetuated or condoned by the state."

To further spread their anti-GBV campaign, the comic book's creators have begun holding "comic book for social change workshop[s]." These events give teens a crash course in comics history and structure, as well as a debriefing on how the medium may be used to ignite social progress. Priya's Shakti co-creator Ram Devineni says that "the only cost [to organize a workshop] is the price of pencils and papers."

Check out the trailer for the comic book below.

Priya's Shakti is available to read online for free.

More like this
6 Organizations Fighting Police Brutality That You Can Support Right Now
By Syeda Khaula Saad and JR Thorpe
Watch Jacinda Arden’s Devastatingly Honest Resignation Speech
By Sam Ramsden
24 History-Making Black Women You Probably Didn't Learn About In School
By Ayana Lage and JR Thorpe
25 Inspiring Quotes From Black Women To Celebrate Black History Month
By Kyli Rodriguez-Cayro and JR Thorpe
Get Even More From Bustle — Sign Up For The Newsletter
From hair trends to relationship advice, our daily newsletter has everything you need to sound like a person who’s on TikTok, even if you aren’t.