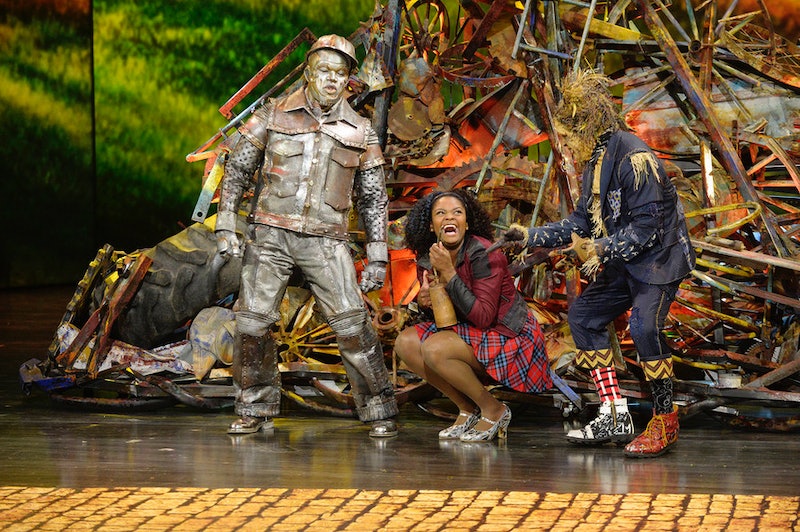 If you're a big fan of the songs from the Broadway musical The Wiz, you'll surely have noticed something was not like the others at about the halfway point in NBC's The Wiz Live! on Thursday, Dec. 3. The Wiz Live! had a new song written by the Tin Man himself, Ne-Yo, along with Harvey Mason Jr., Stephen Oremus, and the Scarecrow Elijah Kelley. "We Got It" was written as The Wiz Act I finale and gave the opportunity for the Yellow Brick Road crew — Dorothy, Scarecrow, Tin Man, and Cowardly Lion — to sing a song all together.

As "We Got It" first started, I felt it obviously didn't belong with the rest of the score — of course, I knew it was the new song and not in the original The Wiz that was written 40 years ago. But as the song picked up momentum, I could see why it was placed in the Act I finale spot. There were gospel choir elements, which tied in nicely with the next song, Evillene's "Don't Nobody Give Me No Bad News." While just shy of being chill-inducing like another Wizard of Oz-inspired musical's Act I finale song (I'm looking at you, Wicked's "Defying Gravity"), it did unite the four characters after Dorothy's "squad" almost abandoned her and helped move the story forward in an uplifting way.

Ne-Yo has been proving for years that he can write pop hits, and with The Wiz Live! on NBC, he showed he just may have Broadway writing chops too.