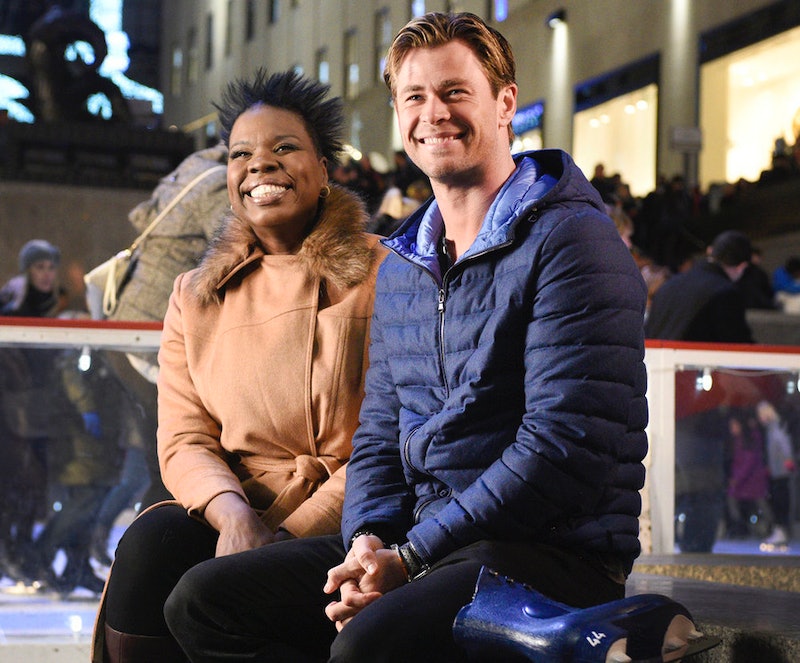 Last time Chris Hemsworth hosted Saturday Night Live, he brought both of his brothers — yes, there are two of them, Liam and Luke — on as special guests during his monologue. This time, his brothers didn't turn up, but Hemsworth's SNL monologue showed audiences what it's like to be a member of his family. "It's like I'm hanging out with a bunch of Hemsworths," he said of the cast and crew.

Turns out, being a Hemsworth might not be s much fun. For the rest of the monologue, he went behind the scenes of the show — and generally bullied everyone in his path. He was slapping papers out of hands, hanging up on others' phone calls, throwing apples at cast members, punching people in the balls, all while calling the studio "Big Chris' House." Bobby Moynihan gets off easy, with just a "tickle attack" (and I bet there's a lot of people out there who wouldn't mind a tickle attack from Chris Hemsworth), but poor Vanessa Bayer gets a pitcher of cold water dumped on her head. Sheesh! If that's what it means to be a Hemsworth, who wants to be one?

The big question: Which brother is on the receiving end of more of this type of torment, Luke or Liam? Luke is older, but Liam is in fighting trim right now, having just ended the whole Hunger Games journey,

Hemsworth is well on his way to becoming an SNL staple. I already mentioned that he hosted once before, but that time was actually earlier this year, back in March, before Avengers: Age of Ultron. At this rate, if he keeps it up, he'll be in the hallowed five-timers club in no time. We'll see if the sketch where he is a space captain in love with a chicken will become a recurring one.