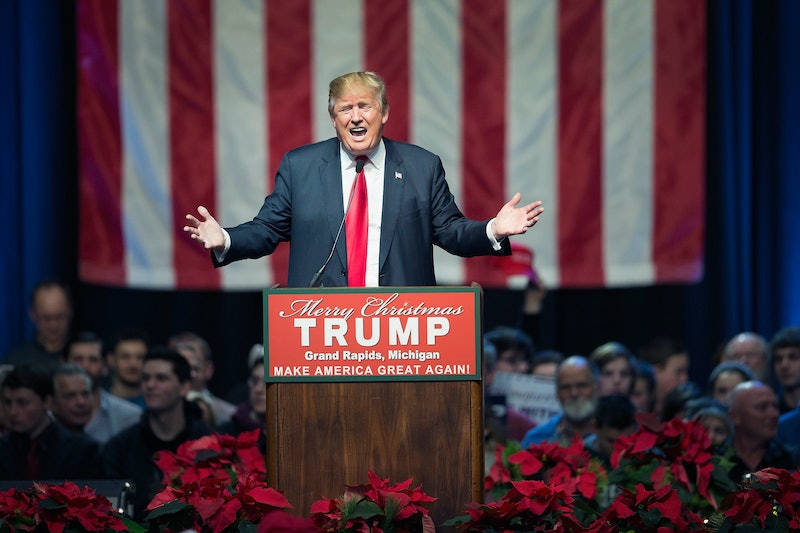 On Friday, some news broke that's relevant to one of the most hotly disputed claims of the presidential campaign season so far, and it's not good news for Republican front-runner Donald J. Trump. According to CBS News, The Daily Beast, and others, Donald Trump appears in an Al-Shabaab recruitment video, a very similar situation to what he'd been furiously denying throughout December.

As you might remember, the question of whether or not Trump's inflammatory rhetoric led terrorist groups to use him as a recruitment tool loomed large following the third Democratic presidential debate. At the time, Democratic front-runner Hillary Clinton alleged that Trump's image had been used in recruitment videos for ISIS, a claim Trump rebuked as "made-up." And indeed, the campaign subsequently backed off that specific claim.

But the Clinton camp did continue to insist (with corroboration from some counter-terrorism experts) that Trump was being closely followed by ISIS, and that his rhetoric was a powerful tool for the militant Islamist organization's efforts. Al-Shabaab is not ISIS, to be clear ― they're an al Qaeda affiliate based out of Somalia. But nonetheless, Trump can no longer deny that he's been used in a high-profile advertisement for a terrorist group.

As ThinkProgress detailed, NBC News terrorism analyst Evan Kohlmann (who's warned about Trump's influence before) highlighted the video's existence on Friday morning. Although the full video had apparently been uploaded to YouTube, it's since been pulled down. As detailed by The Daily Beast's Katie Zavadski, it's not just limited to featuring Trump's virulent anti-Muslim proposals, either ― it also plays on anti-black police brutality to make its case against the United States.

Here's the Trump quote the video uses, spoken during a rally after his campaign issued a statement calling for a ban on Muslims entering the United States. Trump closely paraphrased the statement aloud to the assembled crowd, effectively referring to himself in the third person.

Donald J. Trump is calling for a total and complete shutdown of Muslims entering the United States until our country's representatives can figure out what the hell is going on.

As CBS News notes, there's a distinct emphasis on police brutality and racial injustice in the video, apparently intended to convince black Americans to convert to Islam. But really, the appearance of Trump's proclamation in the video is a worrying sign for everyone ― a major party presidential candidate floating such inflammatory, bigoted ideas can be easy ideological ammunition for some very violent people.