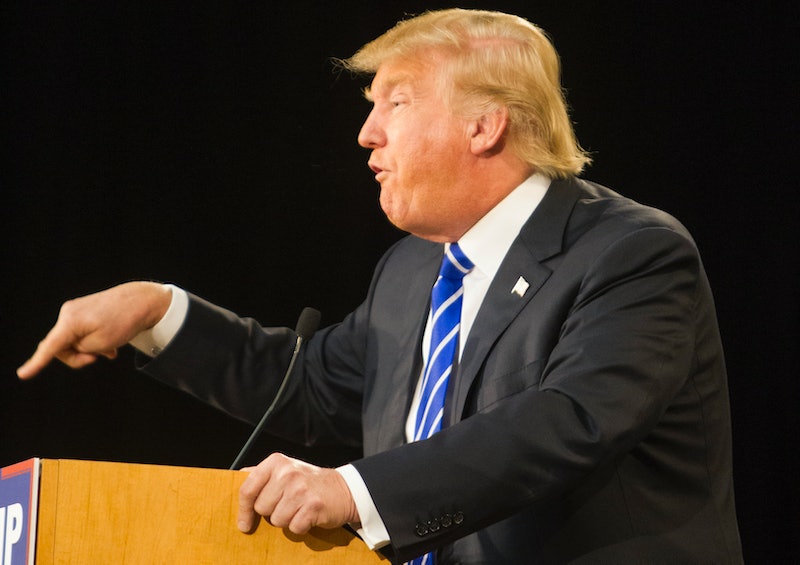 Following the shooting of a man outside of a police station in Paris, Trump took to Twitter and called Germany a "total mess." He followed up by telling Paris (or Germany) to "GET SMART!" Maybe he should take that advice upon himself first and brush up on his geography? The attack he referred to occurred this Thursday on the one-year anniversary of the Charlie Hebdo terrorist attacks. During the attacks, during which 12 people lost their lives. In light of November's Paris attacks and the Charlie Hebdo anniversary, the city has been on high alert, wary of another impending wave of attacks. On Thursday, police in the 18th arrondissement sensed a threat as a man with a knife approached the station and attempted to enter. Police shot the man after realizing he was also donning a suicide bomb belt, which turned out to be fake. Upon searching the body, police found a printed ISIS flag and a letter but the man has yet to be identified.

Although Paris' police thwarted the man's attempt to enter the station and use his knife by killing him, Trump didn't consider the attempt sufficient. The Republican presidential candidate has condemned Muslim refugees and suggested that those who are in the United States as American citizens be monitored. If that's what the man, who also implies that Paris is in Germany, means by "GET SMART," then America is going to have to rethink itself on a number of levels.

That being said, there's still a chance that Trump didn't mean to suggest that Paris is in Germany, based on the punctuation separating the consecutive statements. It's possible that Trump is referencing the sexual assaults that happened in Cologne, Germany, on New Year's Eve. The sexual assaults in Germany happened over a week ago, whereas the shooting in Paris happened just hours ago. Due to the time gap, people don't immediately relate the two events. Even so, Trump had it coming.

His views towards Muslims have been consistently discriminatory, creating an environment that is increasingly hostile towards Muslims and beneficial to ISIS's war on civilization. People admire him because he speaks his mind, unlike many politicians... but this doesn't imply that his ideas are admirable. His decisions to promote such divisive thought among Americans have brought the ugly truth of the United States to the surface: bigotry exists here and paranoia runs deep. If he's not geographically stupid, you can count on him being something else.