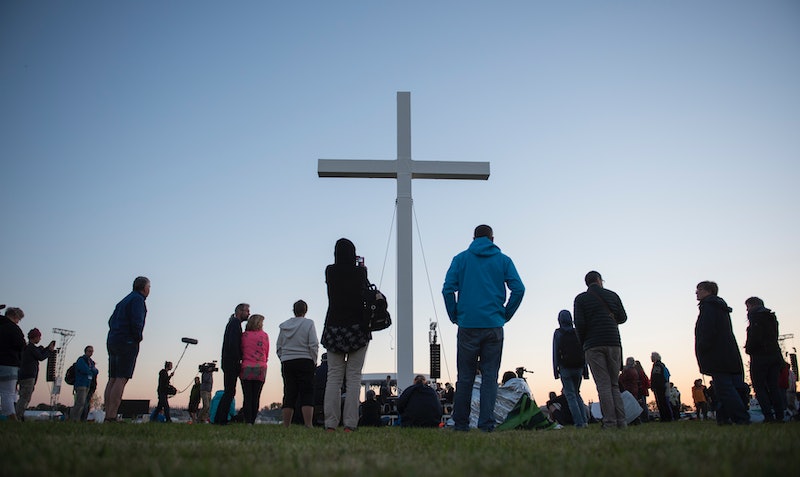 Someone get the conservatives some pearls to clutch, stat: According to a recent study, religious and moral decline aren't linked. Published in the journal Politics and Religion, the study analyzed decades of European survey data dating back to the 1980s — and the researchers found that although religious beliefs are less important to people now than they were three decades ago, their senses of morality remain largely the same. Looks like there's more than one way to direct a moral compass.

To quantify what many would say is an unquantifiable subject, lead researcher Dr. Ingrid Storm classified theoretically immoral behaviors into two dimensions: Those that go against tradition, such as homosexuality or abortion, and those that are against the law or actively harm other people, like stealing or cheating. Analysis showed that religious decline is associated with an increased willingness to tolerate actions that go against tradition, but not those that harm other people. The study did find that the connection between religion and moral values was strongest in countries with strongly religious populations, which Dr. Storm attributed to reinforcement of religious norms in the local community. However, the bottom line is that the study found no connection between less religious populations and moral decline.

"More Europeans are now willing to justify behaviours that go against tradition, but attitudes have not changed when it comes to breaking the law or harming others," Dr. Storm said, according to Science Daily. Basically, we're all taking a cue from Kevin Kapoor in Mean Girls.

This isn't the first study to show no connection between morality and religion; previous research has shown again and again that your sense of right and wrong is largely independent of religion, no matter which one you practice — or whether you practice one at all. That being said, there are plenty of other factors that affect morality, which we'll explore below.

Researchers have long been fascinated by the development of morality, which begins at birth and continues until the day we die. For instance, renowned psychologist Lawrence Kohlberg's theory of moral development posited that we go through stages as we figure out right and wrong: First, we behave according to social norms because we're told to. After that, we do it because we fear social humiliation, and lastly, we behave morally because we understand the impact our effect has on others. Further research supports the idea of changing moral values with age; a 2011 study found that adults are actually more lenient than preschoolers, largely because we take someone's intent into account.

Any social scientist worth their salt will tell you that morality is heavily culturally dependent, especially when it comes to tradition. According to the Pew Research Center, for instance, drinking alcohol is widely accepted in the United States, but a median of 42 percent of respondents across the world find it immoral. In contrast, Americans find extramarital affairs unacceptable, but less of half the respondents in France felt the same way.

Although you may not immediately associate the two, economic status and morality are more closely related than you'd think. In 2012, a series of seven studies showed that wealthier people are more likely to make unethical decisions than those with lower incomes, which researchers attributed to laxer attitudes toward greed. A separate study that same year found that children of middle-to-low socioeconomic backgrounds were harsher on transgressions of convention than their wealthier peers.

Apart from economic status, even the thought of money is enough to affect most people's senses of right and wrong. A 2013 study found that people who are primed to think about money made less ethical decisions afterward, and they frequently framed these decisions as "business decisions." In other words, money encourages us to put financial gain first out of a sense of business acumen.

Like most aspects of personality, our senses of right and wrong are affected by the structure of our brain. The relationship isn't fully-understood yet, but research has shown that three parts of the brain are involved in processing moral decision making: The medial prefrontal cortex, the posterior cingulate and angular gyrus. Furthermore, multiple studies have shown that decreased activity in certain areas of the brain — whether the result of injury or temporary inducement — can totally change our moral decision-making.

If you ever took a philosophy class, chances are you come across the classic Trolley Problem, which forces people to choose between saving five people at the cost of one person's life, or watching five people die in a trolley accident. Of course, the logical action is to save the five people, but research has shown that the way the situation is phrased has an enormous effect on our decision. In one situation, you can pull a lever, diverting the trolley to a single bystander instead of five. In the other, you have to actively push the person next to you on to the tracks to stop the train.