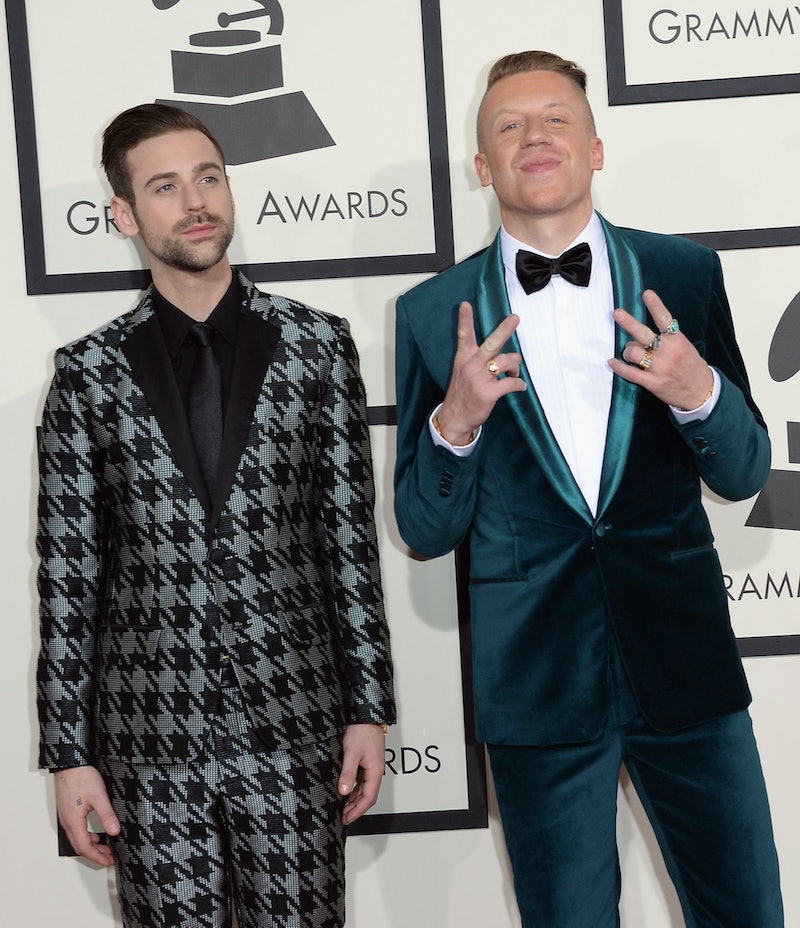 By now, the entire English-music-consuming world has heard about Queen Latifah's mass wedding at the Grammys. The Queen showed her usual serene classiness and wedding-MC skills, while Macklemore and Ryan Lewis performed their song "Same Love." And then Madonna interjected in a white cowboy hat, and things went downhill from there. But before the world's most-watched mass wedding occurred (yep, sorry Sean and Catherine — you were beat), Macklemore dropped the F-word that's part of his song's famous lyrics — the one with six letters, not four. And despite NBC's heavy censorship of every other swear word that night, "f****ts" slipped through, even with that oh-so-fancy delay system.

It is possible that the tiny gibbon in charge of hitting the bleep button fell asleep, but, more likely, network officials let this word through, expecting to pay the fine. This choice seems like a step in the right direction for censorship everywhere, since, in context, the f-word was used to shed light on the unregulated nastiness of YouTube trolls. But let's talk about context.

Usually, the FCC doesn't give two bleeps about the context in which a taboo word is said. As an example, look at Kendrick Lamar's performance: Unsurprisingly, every exuberant n-word was silenced, regardless of context. It has also been suggested that the 2012 decision to loosen the FCC's death-grip on profanity only resulted in more utterances of the word "bitch," sometimes in completely derogatory ways.

Perhaps the FCC is slowly warming to the idea of proper and improper contexts for profanity, but I'm not sure Macklemore's "Same Love" is the proper vehicle for reclaiming the f-word. Lest we completely forget, Macklemore is a straight white dude. He has been a great ally for the marriage equality struggle, but no matter the laws, he can marry whomever, whenever. Also, he may have been called a f****t a few times, but he probably hasn't been discriminated against based on his race, gender, or sexual orientation.

Far before the Grammys, gay rapper Le1f slammed Macklemore for writing "Same Love" — a protest song about a cause that doesn't belong to Macklemore. And, of course, Le1f is right: Macklemore has become famous for his pro-marriage equality stance, while hip-hop artists that identify as LGBTQ rarely make it to the mainstream. He also can't speak for the LGBTQ community because he is neither L, G, B, T, or any other non-cis, non-straight orientation.

After we consider all the context of Macklemore's f-bomb, it seems like he should probably leave the reclamation of LGBTQ slurs to LGBTQ people. And, unsurprisingly, the censors failed to understand the central tenet of insults: What you say matters just as much as how and why you say it.

More like this
Rihanna Skipped The Met Gala For Good Reason — But She Still Stole The Show
By Alyssa Lapid
The Music Industry Continues To Fail Black Women
By Precious Adesina
Celebrities & President Biden Are Enraged By The Leaked Roe v. Wade Decision
By Alyssa Lapid
This 'Hunger Games' Alum Will Star In A New Medical Drama Titled 'A Mistake'
By Alyssa Lapid
Get Even More From Bustle — Sign Up For The Newsletter