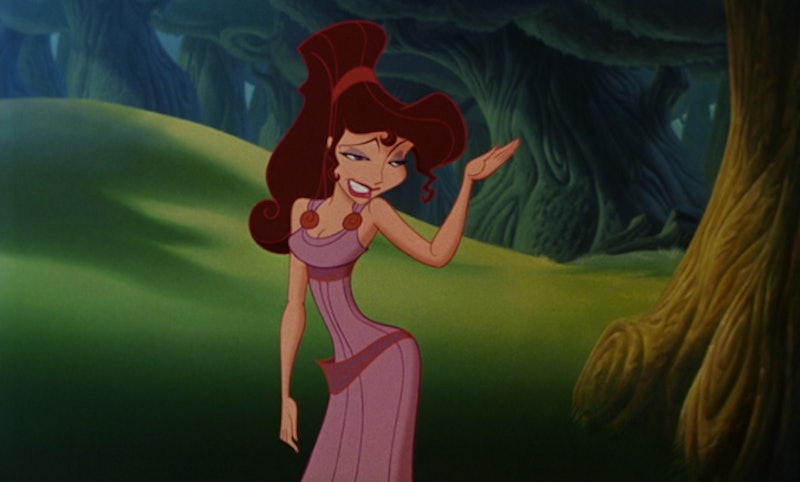 Who’s your favorite Disney Princess? Is it Belle, with her Hermione Granger-esque love of books, or Jasmine, with her independent spirit and pet tiger? Whoever it may be, I’m here to tell you that it’s irrelevant — because Megara from Hercules is far better than any Disney Princess. Them’s fighting words, I know, but I have definite proof why Meg is a standout character far richer than your average Disney royalty.

“Definite proof” here meaning “I have watched Hercules three dozen times and I grew up wanting to be Meg.” Actually, it’s arguable that I did grow up to be Meg... you know, jaded, man-hating, Greek. We’re basically twins, and that’s why I consider my Megara Halloween costume circa 1998 to be one of my finest Disneyworld purchases. But beyond that bold bias, I would argue that Megara is far more intriguing than the average animated heroine, and it’s silly that she doesn’t get as much attention just because she doesn’t have a crown or a princess title.

Anyway, that ridiculousness ends right here, right now, right with this well-cultivated listicle I’m writing on a caffeine high. Here are all the reasons we should be giving (or why we don't) give Meg some serious props.

1. She's A Strong Independent Women Who Don't Need No Demi-God

It doesn't work flawlessly, but she rejects Herc's initial offer to be saved. I love her.

2. She Probably Wrote The Book On Sarcasm, Which Is Uncharacteristic For A Disney Heroine

Mostly the language of Disney heroines don't really include sarcasm. While there's swooning here and there for Meg (hey, she's only human), snark is her main dialect, and she gets more than a few zingers in there.

Meg does not live in a world where she wakes up and gets dressed by woodland creatures... and that's great. We don't need another character whose default personality is either feisty, earnest, or way too naïve.

4. Her Hair... A Work Of Grecian Art, Or Delightfully Realistic?

Sometimes she can emerge from a lake looking all ethereal, other times it's over her eyes like the saddest curtain ever. It's the best of both worlds.

5. Also, Not Everyone Can Pull Off Purple The Way She Can

Meg has a signature shade of orchid that no other animated lady, princess or not, could even touch. Seriously, she rocks that dress of hers.

Hercules is not her first infatuation — it's clear that the emotional wounds left by her last loser boyfriend helped formulate her hardened personality.

I mean, I hope you never literally sold your soul for one, but there's something deeply relatable with the fact that Meg not only has been hurt before, but she's been made to feel like a fool. Like, this guy didn't just go after some other girl, he did it right after she traded her entire life for him. It's dark, but girl, we've all been there.

9. She Can Hold Her Own Against The Lord Of The Underworld

She has to listen to him because he basically owns her, that's the deal. Yet, there is no cowering on Meg's end, and no sign that she's truly fearful of Hades. She's really only fearful of what he may do to Wonder Boy.

Again: She's made mistakes, she's been hurt, and she understands the importance of brow game being on fleek. She is who I want to be when I grow up.

11. And Finally, She Is A Girl Power QUEEN

"Well, you know how men are. They think "no" means "yes," and "get lost" means 'take me, I'm yours.'" IF THIS LINE DID NOT STIR A FEMINIST AWAKENING IN YOUR SEVEN-YEAR-OLD SELF, I WILL SHOW YOU THE DOOR.

This is just the tip of the iceberg, but you get my point. All hail Meg, a goddess amongst princesses.