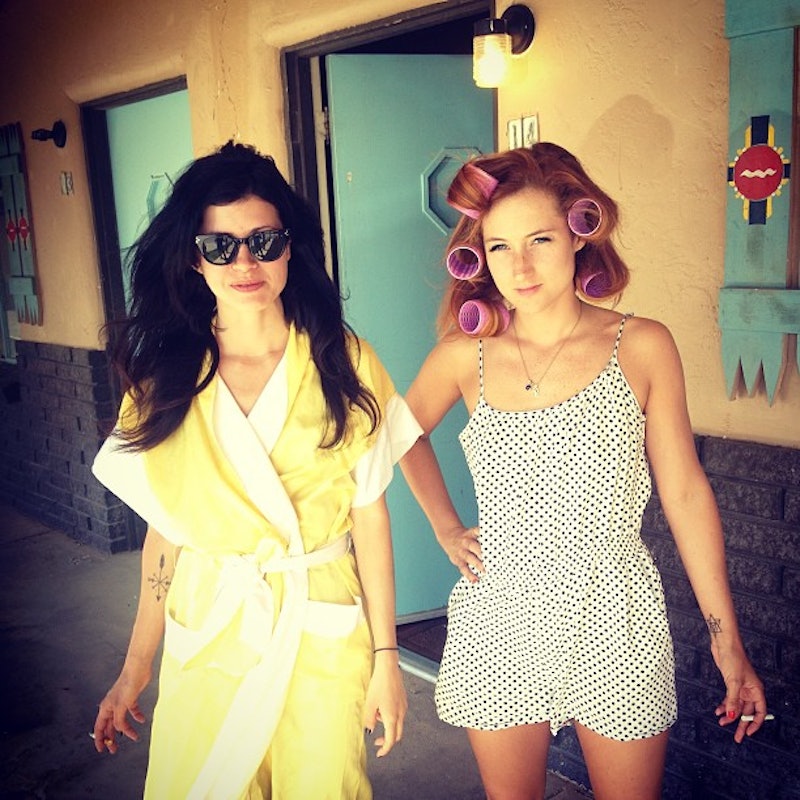 The headline "Life as a Truck Stop Stripper" sounds like any story that would find itself right at home on VICE. It's immediately provocative, it implies the publication's beloved "Gonzo" approach to journalism, and it appears seedy enough to shock readers. And while it is the lead-in to VICE content, it's also the concept of a new series called Every Woman from filmmakers Natalia Leite and Alexandra Roxo aimed at destigmatizing women's roles that are traditionally looked down upon — hence the strip club setting.

However, since their first episode of Every Woman, which finds both women working as strippers in a truck stop bar "where strippers go to die" in New Mexico, was released on VICE.com, they've incurred some serious wrath from writers and viewers on Twitter and in VICE comments claiming the series is "exploitative," "self promoting," and "a hipster version of the simple life [sic]" (referring, of course, to the Paris Hilton and Nicole Richie reality show in which they worked as burger flippers and nudist colony maids to garner laughs from American audiences).

Upon screening the entire series pilot, there were certainly areas that merited some concern — including one scene that finds the two women prancing through a Walmart to twinkly music and another that finds them doing the same in the strip club parking lot — but other scenes that give life-long strippers a legitimate voice onscreen seem to further the series' original goal: to normalize a role that's deemed "other" by much of society.

So, we called up the filmmakers and asked them to defend their project themselves and talk about the thought process behind it.

The main issue Leite and Roxo's critics seem to be focusing on is the fact that they actually worked as strippers instead of reporting on strippers, rendering them participants in "journo-tourism." However, Leite and Roxo assert that by participating, they were able to present the truth of these New Mexico women more fully.

When asked why they chose to immerse themselves rather than interview and observe the women at the center of their concept, Roxo says, "We wanted to show the rawness of it without just standing on the sidelines. People are always going to criticize the tourist journalism aspect ... but I think there’s something to going out and trying it before we talked to these women."

It's something Leite says actually helped them accomplish more in depth interviews with the women working at the club — many of whom appear in the short film and have the opportunity to share their points of view on the job and the environment.

"If someone were to just go into a strip club and say, 'Hey, I’m a filmmaker from New York and I want to interview you,' there’s like a separation that happens immediately," she says. "And I think we got access to a lot of things — the women felt comfortable around us because they knew that we were doing their job too and they saw us working and they saw us on stage and it was a very different interaction."

Toward the end of the episode, after Leite and Roxo have danced a few nights on stage, given lap dances, and received various sexual propositions from the local truck drivers — many of whom get a chance to tell their own personal histories as well — Roxo breaks down in tears and frustration over the culture shock she's experienced upon taking on this profession. It's something that many detractors have focused heavily on, but Leite says it's those pieces of the documentary that might help other young women understand what the job is like.

"[For] people who were watching and thinking, 'I would never get that job,' hopefully there can be more understanding. You know, we would never have chosen that job, but we did it and we can talk about that," she says.

Of course, there are some clear cut elements that foster the knee-jerk reaction that many viewers had — some who claimed they watched the first two minutes and turned the video off. Roxo and Leite are both attractive, artistic women living in Brooklyn; the depiction of their everyday lives at the outset of the episode appears as if it was ripped from the set of Girls; and the still image chosen to represent the video is of the two women topless, with full make-up, glowing in the New Mexico afternoon sun.

But both filmmakers assert that these judgments are unfair. After explaining that they shot, edited, and worked on the sound for the doc, Roxo takes on the claim that she and her partner are simply "privileged" girls with a camera.

"I don’t think anyone was like. 'Great job shooting and editing and acting, girls.' They were just like, 'Oh, those girls must be privileged,'" she says."They don’t even know about us. I don’t come from money. I worked my way through college. I’ve got student loans. People just jump to conclusions because we live in New York or come from New York. They don’t know if we’re living in a hovel under the bridge."

And while they do have their champions — a quick survey of Twitter reactions to the film will find almost equal parts criticism and praise for their project — Roxo and Leite are most aware of their critics, many of whom they say may be driven by gender bias.

"I feel like as women we’re being judged more heavily for going into a community of a strip club and working there. And I find that that is a very interesting cultural place where we’re at," says Roxo.

Putting that feeling in context, Roxo references Morgan Spurlock's docu-series 30 Days, which she wrote on Twitter helped inspire Every Woman. "[Spurlock] wanted to become Muslim for a month or become gay for a month and that to me is pretty controversial for a white privileged man in his 40s to just be like, 'Hey, I’m gonna become a Muslim,' but it was accepted really, really well," she says.

When Spurlock introduced his since-cancelled FX series, he was met with claims that he was a "gimmick" guy, but for the most part his experiment was welcomed with open arms — the New York Times pleasantly introduces the docu-host as "shaggy" and "likeable" in a critique of 30 Days' minimum wage episode.

But does that mean that Roxo and Leite are in the right? Are they victims of gender and social stereotypes, being that they're both artistic, highly-educated young women from New York? Or are they simply promoting a "journo-tourism" and showing off their "vacation" as some viewers claim? On one hand, it does have elements that facilitate the "journo-tourism" claims, but their immersion in that world also allows for some rather candid interviews with the women whose jobs they aim to destigmatize.

You can watch and decide for yourself, as VICE now has the full episode of Every Woman available for viewing and more information about Leite, Roxo, and their other projects aimed at social and sexual issues can be found at DrinkPurpleMilk.com.