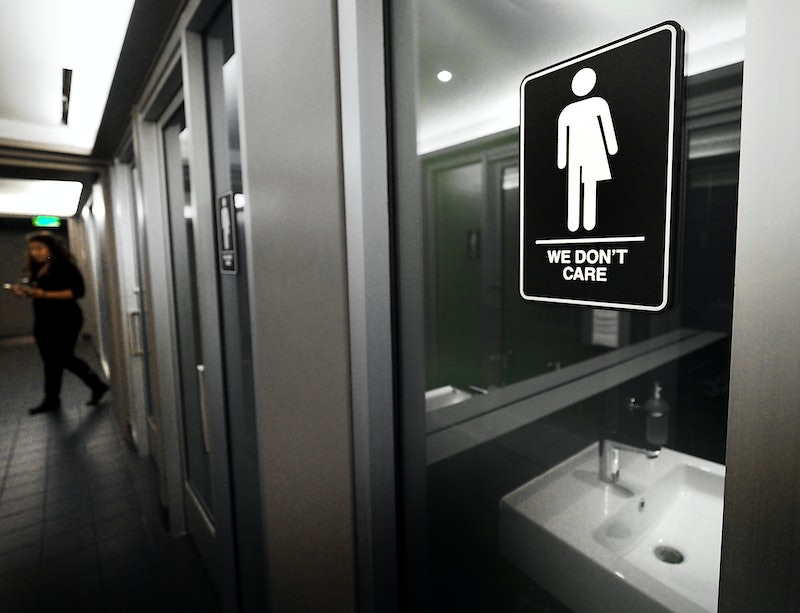 Oh Arizona, what ludicrously discriminatory bill will you think up next?

First, there was the immigration law passed in 2010 that allowed police to stop 'suspicious' (aka brown) people on the street and ask for documentation of their legal citizenship at any time.

Then, earlier this year, Republican Rep. John Kavanagh introduced a bill that would have made it illegal for a transgender person to use a bathroom other than the one designated by his or her birth sex.

Policing this, obviously, would have been at best embarrassing to everyone involved and at worst a total violation of civil rights, and straight up legislated gender discrimination. (I'm voting the latter.)

Luckily, on Wednesday, Rep. Kavanagh pulled his head out of the toilet boil (or at least came up for air) to announce that the bill will no longer be put before the Arizona legislature. Of course, because he's still a tool, Rep. Kavanagh said the bill is only shelved until next year, when it may be introduced again.

I leave commentary on that to Liz Lemon:

More like this
MOBO Awards Found Kanya King On The Woman Whose Grit & Determination Spur Her On
By Kanya King
Amanda Gorman Shared A Powerful Message On Meghan Markle’s Penultimate Podcast
By Darshita Goyal
The David Beckham Qatar Controversy, Explained
By Sophie McEvoy
What To Know About Martin Bashir After Watching 'The Crown'
By Bustle UK
Get Even More From Bustle — Sign Up For The Newsletter