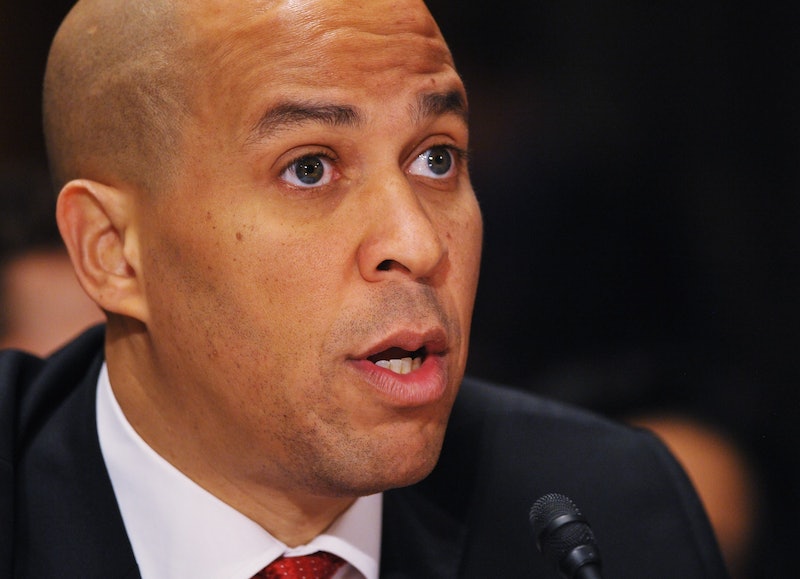 New Jersey Senator Cory Booker's name popped up as a possible replacement for Supreme Court Justice Antonin Scalia following the judge's sudden death on Saturday. President Obama hasn't nominated anyone for the seat yet, but Booker is a possibility — he even has the added benefit of belonging to the Senate, which would be forced to vote down one of their own if the Republican led branch wants to prevent Obama from replacing Scalia. When asked about the potential appointment, Booker disregarded it, telling reporters that he's focused on criminal justice reform right now. So, what criminal justice reform is Booker working on in Congress?

Although Booker didn't directly say whether or not he would accept a nomination to serve on the Supreme Court, he didn't rule out the possibility either. In his efforts to evade such questions, he said all his attention is currently going to his work as a New Jersey senator. "I am very flattered by any speculation, but the reality is there's a lot of work to do right now," Booker told The New York Times' Nicholas Confessore on Saturday. "We're in the middle of some very important negotiations over criminal justice reform, so I'm very focused there."

The negotiations he's talking about involve the Sentencing Reform and Corrections Act that Booker introduced in the Senate in October along with nine other senators. The Senate Judiciary Committee passed the bill, so it was placed on the Senate legislative calendar. Now, Booker and the other senators backing the law have to make sure it has enough support to pass in a Senate-wide vote.

But what is this bill all about? As the name suggests, it focuses on prison sentences, allowing courts to reduce mandatory minimum sentences for certain non-violent crimes and drug offenses. Expanding the scope of the Fair Sentencing Act of 2010 that reduced the sentencing disparity between crack and cocaine crimes, the sentencing reform bill would allow retroactive re-sentencing for people convicted of crack offenses before the 2010 law passed. It would also require the Bureau of Prisons to offer programs aimed at reducing inmates' chances of further criminal behavior and productive activities to all eligible prisoners. In terms of juvenile inmates, the bill would prohibit the use of solitary confinement, except in very limited circumstances.

Booker is very committed to making sure this bill becomes law, as it would help reduce America's huge prison population. "Mass incarceration has had a crippling effect on taxpayers, our economy, our children, public safety and communities of color all while devaluing the very idea of justice in America," he said in a statement when the Judiciary Committee passed his bill in October. "It is time we right this devastating wrong and restore integrity, justice, and compassion to our criminal justice system. I'm hopeful that this bill will soon be considered by the full Senate."

The New Jersey senator will appear on The Late Show with Stephen Colbert Monday night, where the bill and the subject of a potential Supreme Court nomination will probably come up. Maybe Colbert can get a real answer about joining the Supreme Court out of him.

More like this
LGBT+ Men Fleeing Afghanistan Were Denied Asylum By The Home Office, New Findings Show
By Sam Ramsden
Celebrities & President Biden Are Enraged By The Leaked Roe v. Wade Decision
By Alyssa Lapid
Sarah Everard’s Killer Wayne Couzens Is Appealing His Whole-Life Sentence
By Sophie McEvoy
10 Times Boris Johnson Got It Wrong On Trans Rights
By El Hunt and Sam Ramsden
Get Even More From Bustle — Sign Up For The Newsletter