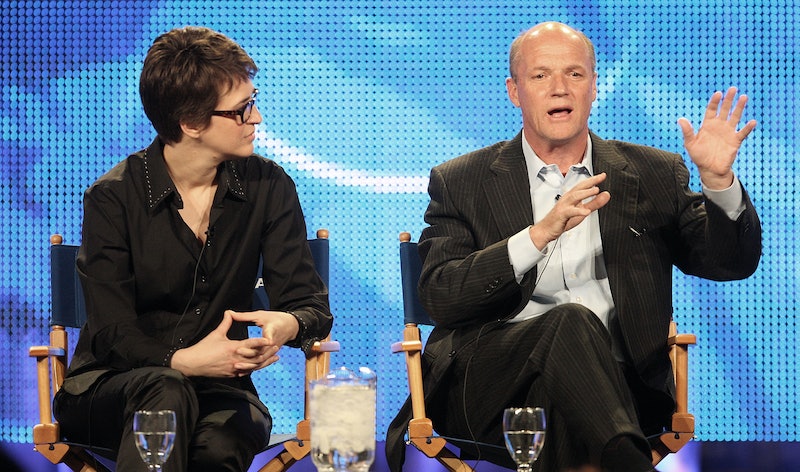 After MSNBC posted a Tweet that outraged conservatives Wednesday, the network's chief, Phil Griffin, has been forced to deny that the channel has a purely liberal agenda. Actually, Griffin says, it's not about MSNBC having a bias against conservatives — it's that MSNBC maintains a "progressive sensibility." Griffin's defense of the channel came after Republican National Committee chair Reince Priebus called on GOP pundits to boycott the network Thursday after the offending Tweet, and demanded an apology from Griffin.

On Wednesday, MSNBC posted on its Tweet account: "Maybe the rightwing will hate it, but everyone else will go awww: the adorable new #Cheerios ad w/ biracial family." The network quickly deleted the Tweet and apologized. "Earlier, this account tweeted an offensive line about the new Cheerios ad," MSNBC posted. "We deeply regret it. It does not reflect the position of msnbc."

In a written statement, Griffin said: ""The tweet last night was outrageous and unacceptable. We immediately acknowledged that it was offensive and wrong, apologized, and deleted it. We have dismissed the person responsible for the tweet.”

Reince Priebus, a regular fixture on “Morning Joe” and Chuck Todd’s “Daily Rundown,” later called the network “disgusting." Priebus sent out a memo stating that unless MSNBC President Phil Griffin took “internal corrective action” and personally apologized, he would be ”banning all RNC staff from appearing on, associating with, or booking any RNC surrogates on MSNBC.”

“They don't have a problem painting every Republican with a broad brush," said Priebus. "And MSNBC have all this poison — we had had to call them out on it. And I'm happy they reacted.”

Other MSNBC incidents that have have provoked Priebus' ire include a poor-taste "joke" that host Melissa Harris-Perry made about Mitt Romney's adopted black grandson at the end of last year, and host Martin Bashir's criticism of Sarah Palin, in which he called her America's "resident dunce". Bashir, best known for his provocative 1995 BBC interview with the late Princess Diana after her divorce from Prince Charles, resigned soon afterwards.

Griffin, meanwhile, has continued to defend MSNBC, insisting that conservatives are not the only targets of the channel's critical commentary: “If you’re a Democrat in trouble ... You’re not going to get a free ride if you did wrong,” he told the Daily Beast. He also insisted that MSNBC's aimed to maintain a high standard of factual reporting, and always apologized when apology was due. "We’ve done that throughout all the last six years that I’ve been here" he insisted.