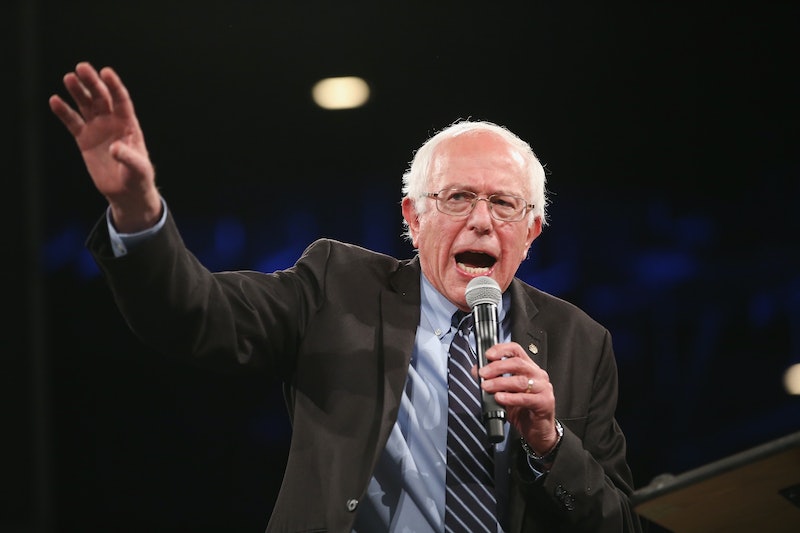 Is your love of candlelit dinners only second to your love of affordable tuition fees? Well, I have a place for you, Bernie Singles, and it's just what it sounds like: a Bernie Sanders dating site. And as we learned from the Singles In America Survey that far from the old-fashioned "don't talk about political issues on a first date rule", being passionate about politics actually is actually great on a first date. So combining politics and dating may just be the secret to a great first date.

According to Distractify, it started from a Facebook page for Bernie Sanders Singles, which reads in the description: "Do you love Bernie? Do you need a lover? Let's play! (But play by the rules. This isn't a lawless land of love.)" Great, right? And then it grew into a page.

The good news is the site is incredibly popular, the bad news it has crashed and needs an upgrade. But they're apparently working on an upgrade, and even have a GoFundMe Page if you want to help others FeelTheBern. The fundraising page says "Do you need help finding love? As a progressive socialist does love feel just out of your reach? We want to create a site to help you keep warm. A beta version is available, but for it to stay running and improve, we need funds!"

So if you're a progressive socialist who feels love is just out of your reach, help them out!

And as much as I'm pro-Bernie all the way, but everyone has their own political views, so here are some other places where politics and dating meet:

If you're leftie but not a die-hard Bernie supporter, this might be the one for you. With the tagline: "Meet your 'politically correct' match using our uniquely progressive match system." SEE WHAT THEY DID THERE? "Politically correct', 'progressive'— nothing like some cheesy dating site lines to remind you we all die alone.

I just want to say the name over and over again. It's hilarious and amazing. OKComrade— the OkCupid for communists. It's just what it says on the tin. It's more of a Facebook page than a site, but with the tagline "More than comrades" I'm happy for ever and always.

If you're not interested in a comrade, then maybe Republican Singles Dating is more up your street. A dating website strictly for conservatives, the interface looks like it has been updated since the 90s. But apparently it's "the #1 Republican community on the Net" according to their site. It is also the only place in 2016 still referring to it as "the Net".