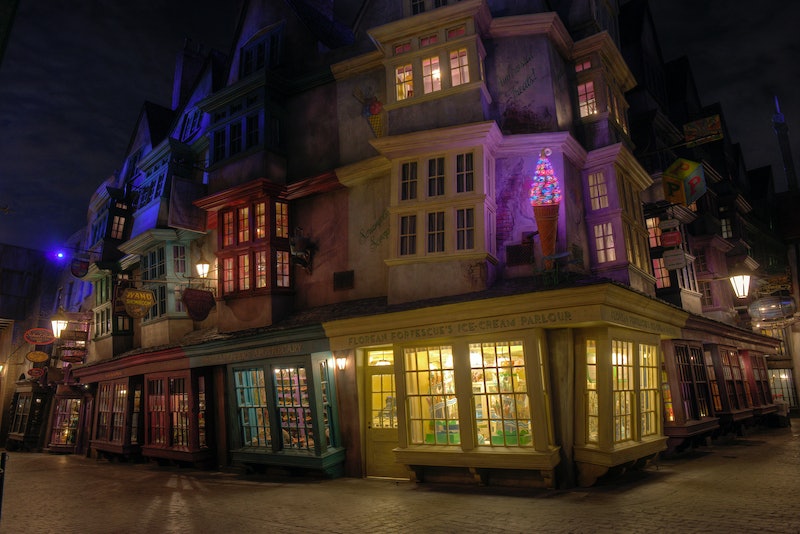 Wow, this latest bit of Harry Potter news is seriously intense: according to the third "Magic in North America" story on Pottermore, there was once widespread panic throughout North America when the wizarding world was exposed — and the only reason it's not in our history books is because all our No-Maj ancestors had their memories Obliviated. Well, almost all of them. Unfortunately for the wizards, they couldn't guarantee that they'd caught everybody — so if you've got a friend who keeps dropping hints about supernatural activity, it might be that her family have let her in on a little secret you don't know about...

But how did the wizarding world mess up their secrecy pact so badly? It was all down to one girl: the beautiful but dim-witted Dorcus Twelvetrees. Poor old Dorcus got the hots for a No-Maj named Bartholomew Barebone, and whipped out her wand in an ill-advised attempt at flirting. Bartholomew, who had a deep-seated hatred for all things magical, tricked Dorcus into giving out the addresses of MACUSA (the Magical Congress) and Ilvermorny (the North American wizarding school). Then, he set off on a mission to kill all of the witches and wizards he could find.

Unfortunately for Bartholomew, he got it a bit wrong: he accidentally shot a group of No-Majes, and wound up in No-Maj prison before the wizards even had to lift a finger.

So it was a lucky escape for the wizarding world, but as they couldn't quite be sure that they'd Obliviated everybody, they were left even more paranoid than before. Which explains why, unlike in the wizarding U.K. that we all know and love from the books, wizards and No-Majes in North America aren't allowed to be friends. (Sad news for those of us who had dreams of marrying a witch or wizard and raising a magical half-blood family.)

But what happens if a witch or wizard is born to a No-Maj family, I wonder? Maybe we'll find that out in the last installment tomorrow...

More like this
The 20 Best Audiobooks To Fall Asleep To
By Aoife Hanna and K.W. Colyard
'Bridgerton' Star Nicola Coughlan Confirms Season 3 Will Focus On Colin & Penelope
By Grace Wehniainen and Alyssa Lapid
Candice Carty-Williams’ 'People Person' Tackles Daddy Issues With Warmth
By Sam Rogers
Sadly, 'Fantastic Beasts: The Secrets Of Dumbledore' Isn’t Streaming — Yet
By Arya Roshanian
Get Even More From Bustle — Sign Up For The Newsletter