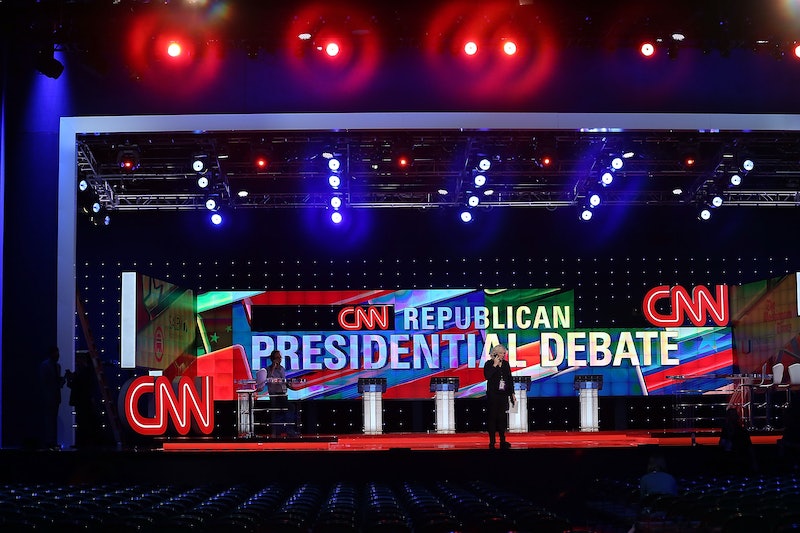 As the 12th GOP debate kicked off in Miami Thursday night, CNN held a moment of silence for Nancy Reagan, the former first lady who passed away Sunday. Debate moderator Jake Tapper said, "We would like to take a moment of silence to remember Nancy Reagan." As Donald Trump, Ted Cruz, Marco Rubio, and John Kasich stood on the University of Miami stage in silence, looking down at the ground, photos of Reagan and her husband streamed on a screen nearby.

The wife of the 40th president of the United States, and a Republican legend in her own right, died on Sunday at the age of 94 from congestive heart failure. According to Tapper, her funeral will be held Friday, so the room full of conservative politicians and voters took a minute to remember and honor her life before jumping into the high-stakes debate. Ronald Reagan, one of the most-loved Republicans of all time, is repeatedly referenced in GOP debates, with the presidential hopefuls dropping his name for a quick boost or comparing their policy plans to his. Both Ronald and Nancy were beloved political figures, and the moment of silence for Nancy was a moving tribute to her contributions to the country.

A Reagan Library spokeswoman, Joanne Drake, told NBC News after her death that the former first lady will be buried at the Ronald Reagan Presidential Library in Simi Valley, California, next to her husband, who died in 2004. "Prior to the funeral service, there will be an opportunity for members of the public to pay their respects at the Library," Drake told NBC News.

The GOP debate continued as normal after the moment of silence, but it was a touching scene to watch, as the Republicans chasing after the White House honored a woman who occupied it for eight years.