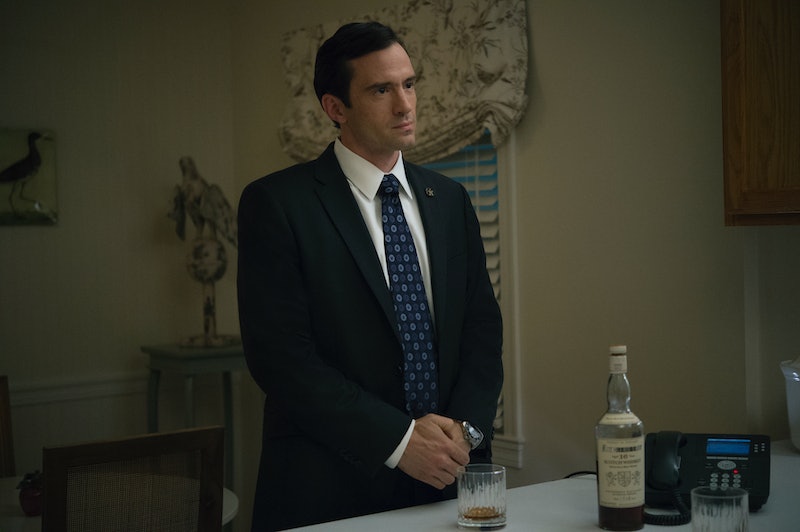 (Spoilers ahead for House of Cards Episode 4!) As for the rest of you daring souls who are ready to brave the Season 4 spoiler terrain, I'd say it's high time we discuss one of the most talked about moments of the season: the death of Edward Meechum on House of Cards. It was a devastating and highly emotional blow to watch the Underwood's loyal bodyguard meet his maker in the line of duty, but that doesn't mean we've necessarily seen the last of him on the show. During a recent interview with Nathan Darrow, who plays Meechum, the actor opened up to Bustle about his character's final heroic moment and whether or not Meechum could return in House of Cards Season 5.

"I would suppose that it is possible," Darrow teases about a potential Meechum cameo at some point in the future. "I mean, if the writers find that's something that's useful to telling some other bit of a story or if they feel like it's going to be interesting to the audience, then I'm sure they could. That's the great thing about storytelling like this, this kind of open-ended series content."

And, of course, it's not as if the HoC writers haven't pulled something like this before. In fact, Season 4 showcased the deceased characters of both Zoe Barnes and Peter Russo during Frank's post-shooting hallucinations, proving that even when you've been killed off of the series, that doesn't necessarily mean you're gone for good.

And as for whether or not this is something the actor would actually be up for doing if the opportunity presented itself, Darrow admits he wouldn't hesitate to portray Meechum once again. "Of course! Of course I'd be up for it," he tells Bustle. "It was very interesting to play that character." And while his reappearance could come in the form of a dream or hallucination, much like Zoe and Peter, Darrow would love it if his return was centered around a flashback. "If it was like a memory," he explains. "If we flashed back to something that the audience hadn't seen from like some years ago, I think that'd be great, of course. It's interesting." A sentiment that I'm sure viewers will echo.

Throughout the years, Meechum quickly became a House of Cards favorite and his absence throughout the remainder of Season 4 weighed heavily on us all. So the thought of him possibly returning, even in just a flashback capacity, is an exciting notion to consider. Even in death, there's still so much of his story left to tell. Your move, writers.