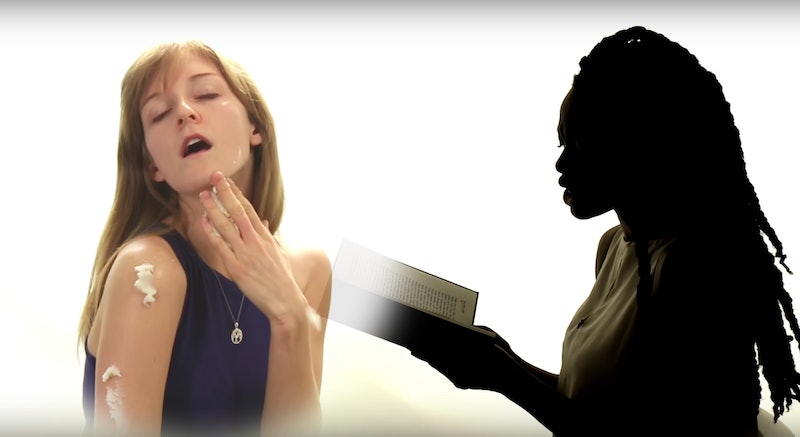 There's a ton of reasons why we need to read more literature by authors of color, but Buzzfeed has just pointed out one of them. In a hilarious-but-true new video, they've flipped the scales — and shown us white people described like people of color in literature. Because here's the thing: some white authors are terrible at describing people of color in books.

Sometimes, white authors tend to get stuck on words like "exotic." These words may be used as a compliment, but the effect is actually to fetishize people of color. And it gets worse: white authors often compare people of color to food. "Caramel" or "butterscotch" are supposed to be flattering — but POC are humans, not treats to be devoured.

Of course, there's nothing inherently wrong with using a food comparison. Authors are always looking for new ways to craft meaning from words, and if you think "mashed potato" is the most beautiful way you can think to describe your character's skin, then fair play. But now that the tables are turned, doesn't it sound a bit weird?

That's what Buzzfeed is pointing out in their new video. White writers lazily default to these consumerist metaphors when describing characters of color — in a way that they never do when describing white characters. White people can have "indescribable" beauty, whereas POC's beauty can be reduced to an overused, fetishist cliche. Hmmm...

Now, if only there was a way to find more accurate and complex descriptions of people of color in books. Like, I don't know — reading more authors of color perhaps...?

More like this
The 20 Best Audiobooks To Fall Asleep To
By Aoife Hanna and K.W. Colyard
30 Books To Read This AAPI Heritage Month
By K.W. Colyard
Simply Sayo Doesn’t Consider Kpoetry Hard Work
By Jessica Morgan
Conversations With Friends' Endometriosis Scenes Are As Brutal As It Gets
By Ivana Rihter
Get Even More From Bustle — Sign Up For The Newsletter