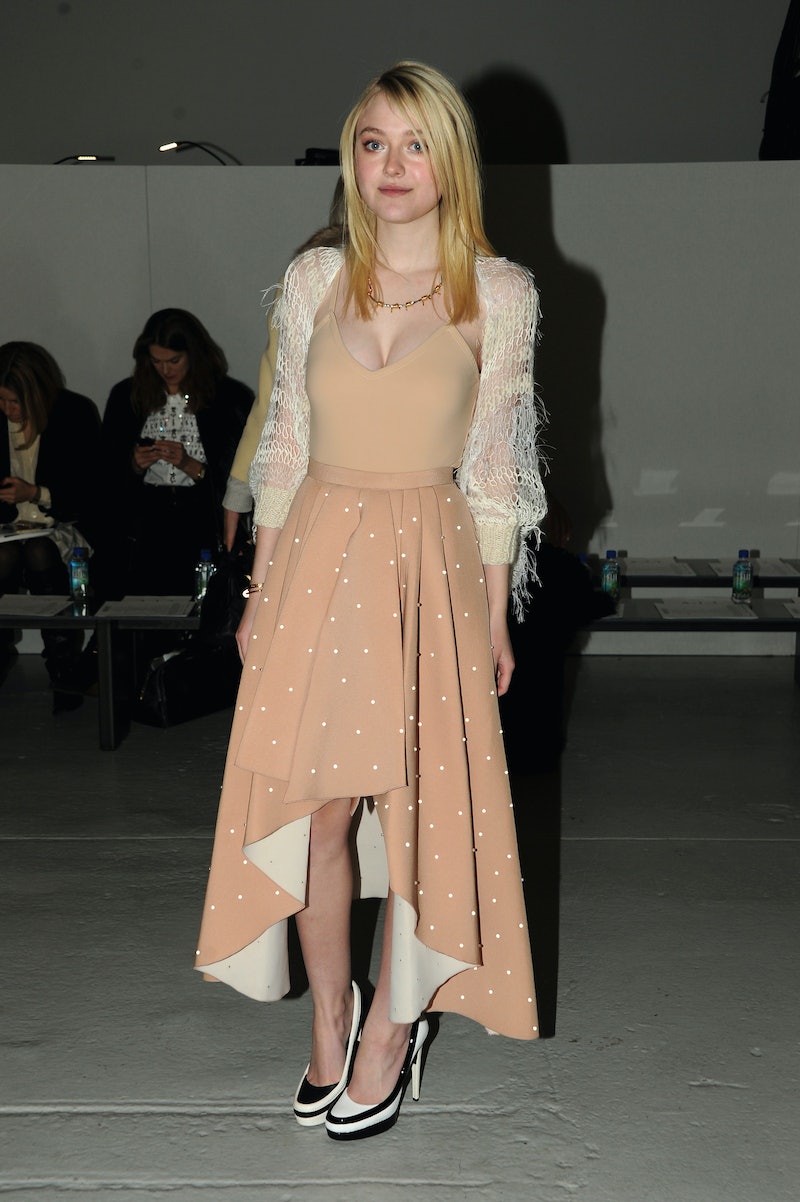 Seen on anyone other than the 19-year-old actress, the nude tank and high-low skirt combo — which she paired with a cream crocheted cardigan, a simple gold necklace, and kitschy black-and-white loafer pumps — may seem entirely tame. But it was the cleavage on display that Fanning turn a few heads, for better or for worse.

The actress has practically grown up in the public eye, walking her first major red carpet in 2001 for her breakout role in I Am Sam. And though Fanning's style has naturally matured over the years — going from cutesy, girly gowns to edgier outfits from designers such as Valentino, Chanel, and Miu Miu — this may be the first time we’ve ever seen the sophisticated actress in such an outright, unashamedly sexy look.

While this cleavage-baring number is a big change for the Night Moves actress, it may have been a long time coming. For one, Fanning has never been one to shy away from her fair share of mini dresses and the occasional crop top. She’s also started showing off a bit more skin lately with deeper-plunging necklines, like the one seen on her stunning navy Elie Saab gown at a movie premiere last year. And her outfit at the Rodarte show isn’t the first time she’s shown some skin in a look from the designer duo.

At the 2013 Met Gala, Fanning strutted down the red carpet in a black Rodarte gown complete with side cutouts and major illusion netting in the back.

Considering that Fanning has long been a fan and muse of Rodarte’s designers, Laura and Kate Mulleavy, and has attended Rodarte shows year after year, this may be the start of a whole new, more mature, and much more seductive style for the star. We just hope Fanning's 15-year-old sister Elle, also a Rodarte fan, waits a few more years before taking the same path.

More like this
Here Are All 703 Outfits Rachel Wore On Friends
By Kat George
How To Get Wednesday's "Soft Goth" Lip, Straight From The Makeup Designer
By Audrey Noble
Jenna Ortega's Hair Routine Occasionally Involves Washing Out Fake Blood
By Olivia Rose Ferreiro
Hailey Bieber's Best Hair Moments Of 2022
By Audrey Noble
Get Even More From Bustle — Sign Up For The Newsletter