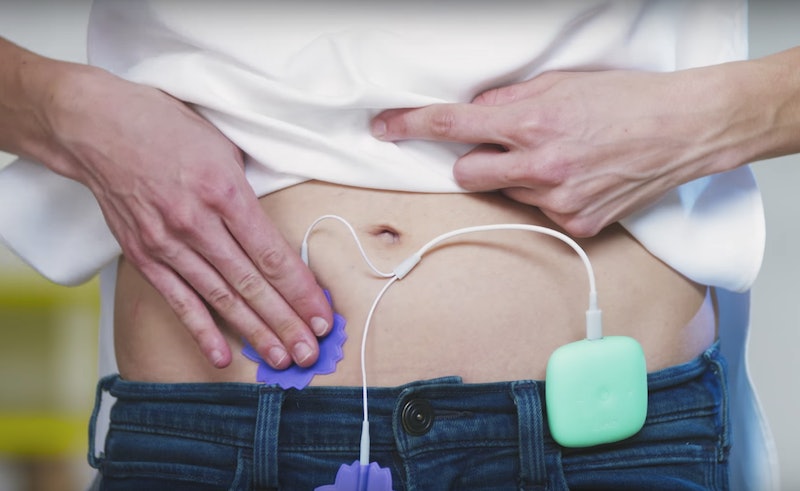 There is no feeling quite worse than waking up in the middle of the night and realizing that not only have the blood rains begun, but that you are in SURPRISE crippling agony from your uterus to your toes. Livia, a device that "turns off" period cramps, wants to help you fight Aunt Flo by stopping the pain straight at the source. Whereas you've probably learned to squelch period pain by popping pills or tried to find other natural remedies like exercise (ugh) or avoiding salt (nooooo), Livia offers a less annoying, more cost-effective, and simpler solution, so scootch your agonized organs over here and listen up.

As Livia explains in their demonstration video, we feel menstrual pain (and all pain, really), thanks to pulses from our brain. Biologically, this is usually super helpful — pain is an indication that Something Bad Has Happened and it needs to get fixed, stat — but when it comes to period pain, all it does is needlessly slow you down and make you miserable. Enter Livia. The device uses electromagnetic pulses to halt the brain's pain signals straight at the source. You simply attach the two sensors to your lower abdomen, turn it on, and voilà!

The company claims that it works even faster than taking pain medication, and comes with other long-term benefits. Not only is it safe and fast, but it will last for several years, ultimately save you a ton of money (pain meds don't come cheap, y'all!), there are no side effects, and you won't build up a tolerance to it. Also, can we just talk about how adorable it is? As a connoisseur of shades of pale pink and pastel everything, I heartily approve.

“Over 50% of women suffer from primary menstrual cramps, for which they consume large amounts of painkillers. Livia uses a pain relief method that does not involve drug consumption. The idea is to close the ‘pain gates,’" explained Professor Bari Kaplan of Women’s Hospital – Beilinson on the campaign's Indiegogo page. "The device stimulates the nerves, making it impossible for pain to pass. The method Livia uses has been proven effective in several clinical studies and I strongly recommend the use of the device to relived PMS pain at any time.”

Basically, it's 2016, guys. We have hoverboards and a woman running for president and milkshakes the size of mountains. It is high time we add "painless periods" to the list of things humanity is capable of achieving.

Livia's Indiegogo page has almost doubled its goal for funding, but it's not to late to preorder your own. Right now they're going for $85, a steep discount on the $149 retail price when they come out in October 2016. Just imagine, only approximately seven to eight more terrible periods until Livia comes to the rescue! Learn more about Livia by checking out their campaign video here (but fair warning, you WILL laugh out loud and embarrass yourself in public):