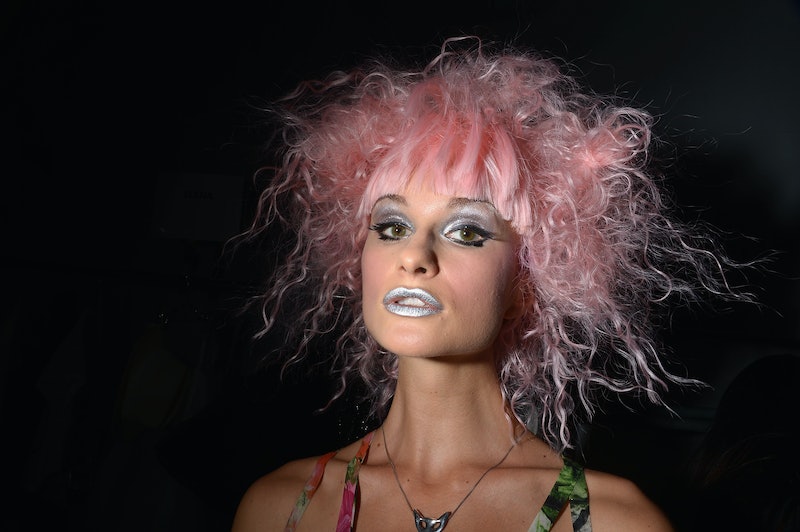 Big Brother is watching you — your Google searches, your flirty emails, and even that video clip of you drunkenly buying a Snickers from the bodega on the corner at 4 AM — but what if you don't want to be found? The key to video camera anonymity, shockingly enough, is something the fashion industry has been dabbling for years: big sunglasses, elaborate makeup, and freaky hats.

Facial recognition software searches for symmetry — as do humans, when looking for potential mates — so if you want to keep your identity a secret, you can use makeup to wreck that symmetrical ideal. But we're talking about a little more than just extra eyeliner; you've gotta be willing to really go all out to fool the all-seeing eye of Mr. Government. Did someone just say "Good thing it's fashion month, because I just bought ten crates of MAC Paint Pots and am feeling wild?" No? Must have been the wind.

Adam Harvey, who makes a living "blowing smoke in your face detector," is the brains behind CV Dazzle, a "catalog of designs that can be employed as camouflage from face detection, both physically and digitally." Basically, CV Dazzle is a series of hair and makeup patterns that manage to look couture-worthy while still disorienting surveillance cameras. Sure, some of the looks aren't ideal for, say, a job interview with the FBI, but others are surprisingly haute — smooth, asymmetrical bangs paired with geometrical black-and-white patterns painted onto cheeks will keep your privacy intact and make you look like you walked straight off a conceptual Alexander Wang set.

(Afraid you'll sound paranoid when people ask why you're wearing a black blotch of eyeshadow across one cheek? Tell them you're commenting on our society's unfair preference for symmetrical faces, then turn and run. Faster!)

If the idea of painting elaborate makeup on your face every day sounds exhausting, treat yourself to a pair of oversized designer sunglasses instead. Alex Kilpatrick, co-founder of Tactile Information Systems, says that obscuring the area around your eyes is one of the most important ways to confuse facial recognition software — and it's also one of the coolest, since who doesn't want to look like an extra in a Slim Aarons photograph? Wear them inside and pretend you're recovering from one of those wicked-yet-glamorous hangovers (repeat after me: "It's not Friday night until you've killed three bottles of champagne with Truman Capote, darling") when in reality, you're just giving the glossy black surveillance camera in the corner the mental finger.

More of a hat person? Your friendly neighborhood watch group, Anonymous, has a DIY solution for you. By attaching a few infrared LED lights to a hat (they recommend a baseball cap, but surely a slouchy beret would work just as well), you'll be completely anonymous to cameras; they'll pick up the LED light, but the rest of the world won't notice it at all.

Whichever way you choose, it's good to know that fighting back against Orwellian surveillance doesn't have to involve a total lack of style. While asymmetrical makeup and huge indoor sunglasses might be a little too much for your average Mossimo-clad Joe, the government hasn't counted on how willing the fashion set is to take risks. Darling.