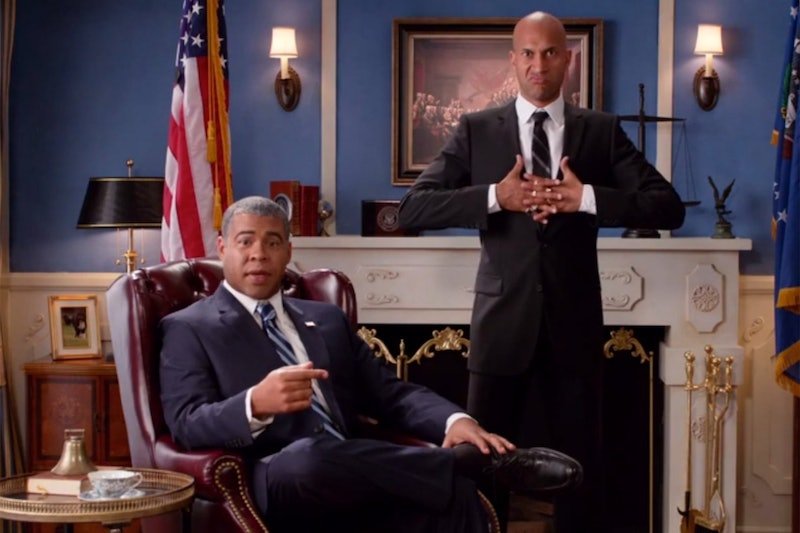 I share something in common with Keegan Michael Key and Jordan Peele, the stars of the upcoming kitten-centric film Keanu . All three of us have met the President of the United States, Barack Obama. My meeting was by accident: He came into the ice cream shop where I worked as a teenager, and I was entirely thrilled to serve him up a bowl of mint chip. At the time, he was running for the democatic nomination. Key and Peele's meeting was slightly less organic.

Having portrayed the president and his "anger translator" in several sketches of their Comedy Central series, Key & Peele , the president invited the duo to take an active role in the 2015 White House Correspondents' dinner.

The pair's appearance at the dinner was memorable to be sure, but with the President's second term winding down, I'm curious to know how Key and Peele feel about the end of what is truly a historical era. I tell them I'm quite sad about it.

Key takes a moment before responding. "It's a miracle — a miracle — that he's gotten as much done as he has. A miracle. I appreciate everything he has done for us," the 45-year-old says. "I'm also sad, but I appreciate everything he's done for us in the world theater. Other people for a while we're looking at America and saying, 'Oh, maybe it's not so bad in the States. Maybe they didn't completely lose their minds.' He dealt with just about everything he could with a certain amount of aplomb. I think you can't ask for more from the man who is representing an entire nation."

Perhaps when Obama is done representing our great nation, and Key and Peele have a moment away from their busy schedules, we can all share a pint of mint chip together. You know, just a thought.

More like this
What Is Barack Obama’s Net Worth? He Makes *Way* More Now As An Ex-President
By Hugh McIntyre
The 'Hocus Pocus' Sequel Finally Has A Release Date & It Makes Total Sense
By Shannon Barbour and Radhika Menon
Watch The Dramatic First Trailer For Netflix's Jennifer Lopez Documentary
By Alyssa Lapid
What Does Doctor Strange’s Third Eye Mean?
By Arya Roshanian
Get Even More From Bustle — Sign Up For The Newsletter