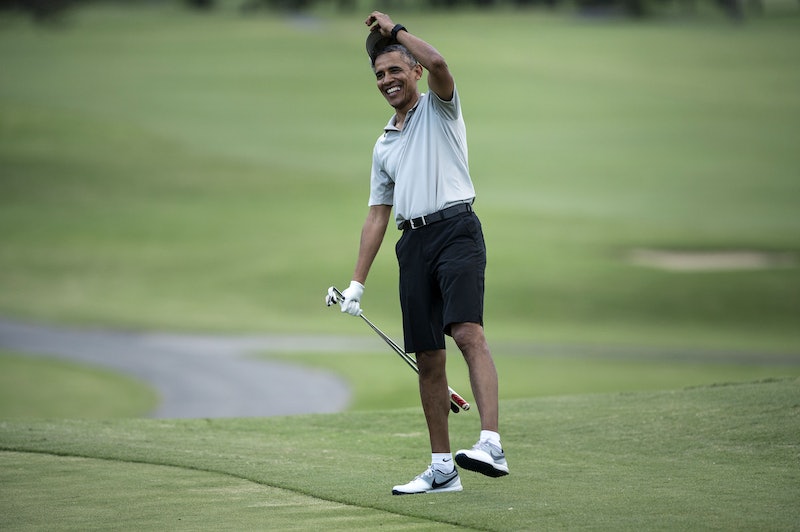 It's hard to believe that this was President Obama's last White House Correspondents' Dinner — and his hilarious speech confirmed that he could definitely pursue a career in comedy as his next gig if he wishes. But, as Obama's "Couch Commander" video showed, he's not quite sure what he's going to do with himself in January when his eight years in office come to an end. Like his speech, the video was filled with rapid-fire jokes and I immediately wanted to watch it again — and, luckily, it's already been uploaded to YouTube thanks to the speedy folks at USNews.

Obama foresees some struggles in his future as he ponders what he'll do in D.C. for the next two years. Bored with helping Biden decide between two identical pairs of sunglasses, he heads to the DMV only to be grilled about the authenticity of his birth certificate. But the real fun begins when he decides to experiment with Michelle's Snapchat. He sends out a vid of himself enthusiastically stating that, "Obamacare is great and it's really working!" When it goes viral in a not-so-great way, Michelle lays down the law and sends him off to spend time with someone whose been through a similar experience — John Boehner. The former Speaker advises him to just "be you" again (and to please stop sending him LinkedIn requests).

For Obama, there's real excitement in wearing his mom jeans in peace, sneaking to McDonald's while Michelle is in spin class, and the fact that no one on CNN cares about how many rounds of golf he's played this year. After eight years of relentless scrutiny, it's the little things in life.

But, in all seriousness — can Obama please join Snapchat and send me a LinkedIn request? Unlike everyone else in the "Couch Commander" video, I'd accept his request in a hot second.

More like this
What Is Barack Obama’s Net Worth? He Makes *Way* More Now As An Ex-President
By Hugh McIntyre
Cardi B Explains To David Letterman Why She Uses Her Star Power For Politics
By Jake Viswanath
Kim Kardashian Remembers Her Last Words To Death Row Victim Brandon Bernard
By Jake Viswanath
Watch Benedict Cumberbatch Lead An ‘SNL’ Medieval History Lesson On Roe v. Wade
By Grace Wehniainen
Get Even More From Bustle — Sign Up For The Newsletter