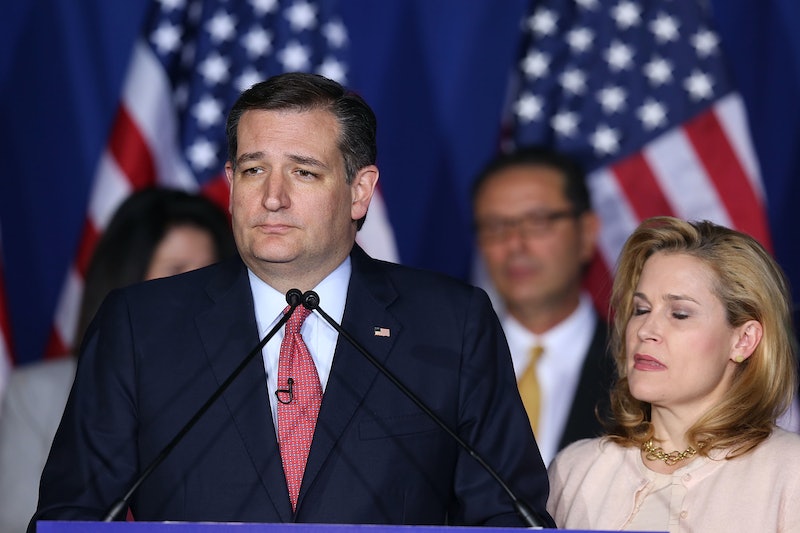 After a painful loss in Indiana on Tuesday night, Ted Cruz dropped out of the Republican race for the presidential nomination, making Donald Trump the "presumptive" (as Republican National Committee Chairman Reince Priebus put it) nominee. But now that Trump is the man Republicans seem resigned to, it may be a whole lot easier for Democratic frontrunner Hillary Clinton come November. That is certainly what TedCruz.com is predicting.

When you go to the website, you get a smiling picture of the former Secretary of State with the caption: "Next President of the United States of America!!!"

Although TedCruz.com wasn't the Texas senator's actual campaign site. That's TedCruz.org — and considering it's plastered with shining, gleaming photos of Cruz and Carly Fiorina smiling and waving together, its manager is blissfully unaware (or actively ignoring) Tuesday night's news.

TedCruz.com's proclamation that Clinton's path to POTUS is all cleared isn't far-fetched. In a hypothetical Trump-Clinton matchup in the general election, a CNN/ORC poll found that the former Secretary of State beats the reality TV star by double digits. While the poll was based off of data gathered ahead of Trump's victory in Indiana (and, thus, Cruz's dropping out), it found that Clinton earned 54 percent of the vote, while Trump snagged 41 percent. So, TedCruz.com's prediction seems pretty spot-on.