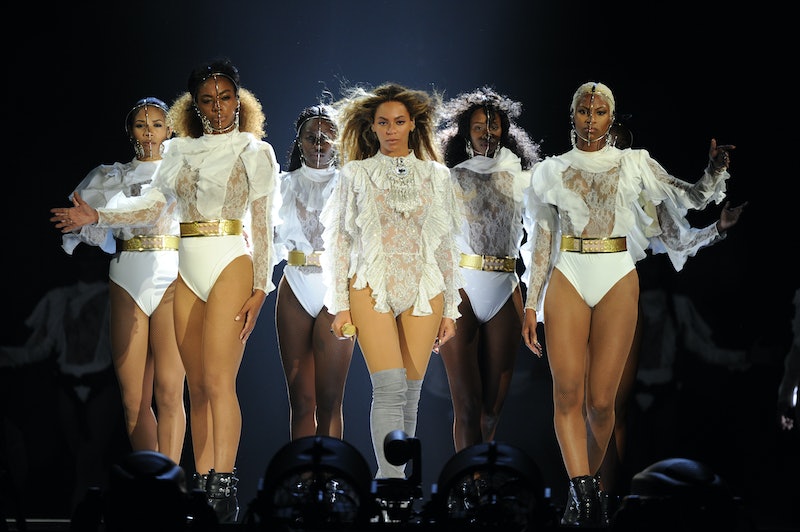 OK, Beyhive, now let's get in formation. If you missed out on getting tickets to Beyonce's Formation Tour, it may finally be your time to get your seats. According to record label Parkwood Entertainment a total of seven shows were added to Beyoncé's Formation World Tour following the singer's touring stint over in Europe. After her August 3 show in Barcelona, the Lemonade singer will be returning to the United States for shows starting September 7 stopping in New Jersey, California, Texas, Louisiana, Georgia, Pennsylvania — and a rescheduled show for Nashville, Tennessee. Can I get a praise hands emoji?

While ticket holders for the cancelled May 5 Nashville, Tennessee show can still hold on to their tickets for October 2, all other tickets are set to go on sale via Live Nation and Ticketmaster as of May 13. Meanwhile, tickets will also be on sale through stadiums included in the continued line-up, including MetLife Stadium, Dodger Stadium, Levi's Stadium, the Mercedes Benz Superdome, and more, which adds to the ticket sales already estimated by Billboard.com to have reached up to $200 million. With these seven additional shows on the line-up, it's time to make sure you're not missing out.

The Formation World Tour is already underway, since Beyonce kicked it off on April 27 in Miami's Marlin Park Stadium. Fans set to go see Queen Bey live in concert can not only expect songs from Beyonce's latest hit album and visual album release, Lemonade, but they can also expect throwback performances of hit songs including, "Crazy In Love," "Halo," and even "Single Ladies." Basically, the Formation World Tour is going to be the tour of the summer.

What are you waiting for? Mark your calendars for the May 13 at 10 a.m. Eastern Standard Time. Your chance to party with the rest of Beyhive is not over yet.